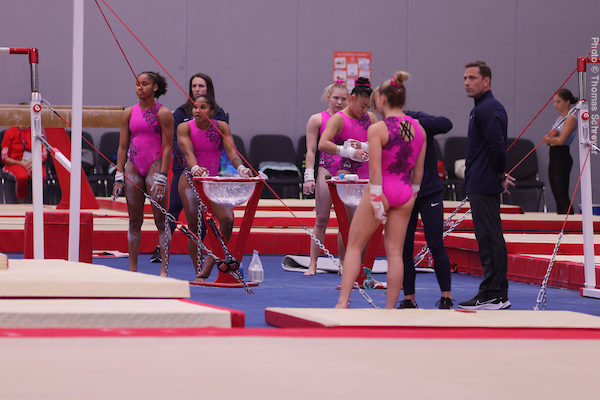 Wong – does the double-double mounted tuck, low landing on the Arabic double pike, 2 ½ to the front half, double back pike jump… great presentation as always!

BB: Derwael solid as ever on his first lap; wobbles on the route exit climb the turn after, the rest is good!

Blakely – very strong on her DTY, best of all warm up turns

Wong, Carey and Chiles both warm up jumps

Wong – DTY a form problem in the air, back up safely on landing; second arch half on front layout half some bent but solid legs;

Belgium – FX: doesn’t seem to be a problem for the team here… No Derwael in the lineup for this event, which we know of (doing UB and BB only); Brassart with full in pike and full in tuck first and second pass, good landings!

Chiles – full toes at piked Tkatchev at Pak very good range, Maloney at Gienger and everything else clean – very good!

Carey – hit a solid routine, jump on the landing!

Wong – good first half, but the Maloney to Pak comes forward and she does a back hip circle, recovers well and finishes strong

Blakely – really clean set, fits as well as it gets!

Belgium UB: A fall in their four pressing routines, but incredible from World and Olympic champion Derwael!

Carey – perfect on the triple set, acro and dance skills are solid, little too turned on the double pike and a few steps back

Jones – good minus a little wobble on the switch side

Chilis – very solid, no problems at all!

Wong – wobbles on a full twist wolf hop, then lands on a set and spins her leg up, unusual of her… of course, her spin after is much better and she’s almost perfect!