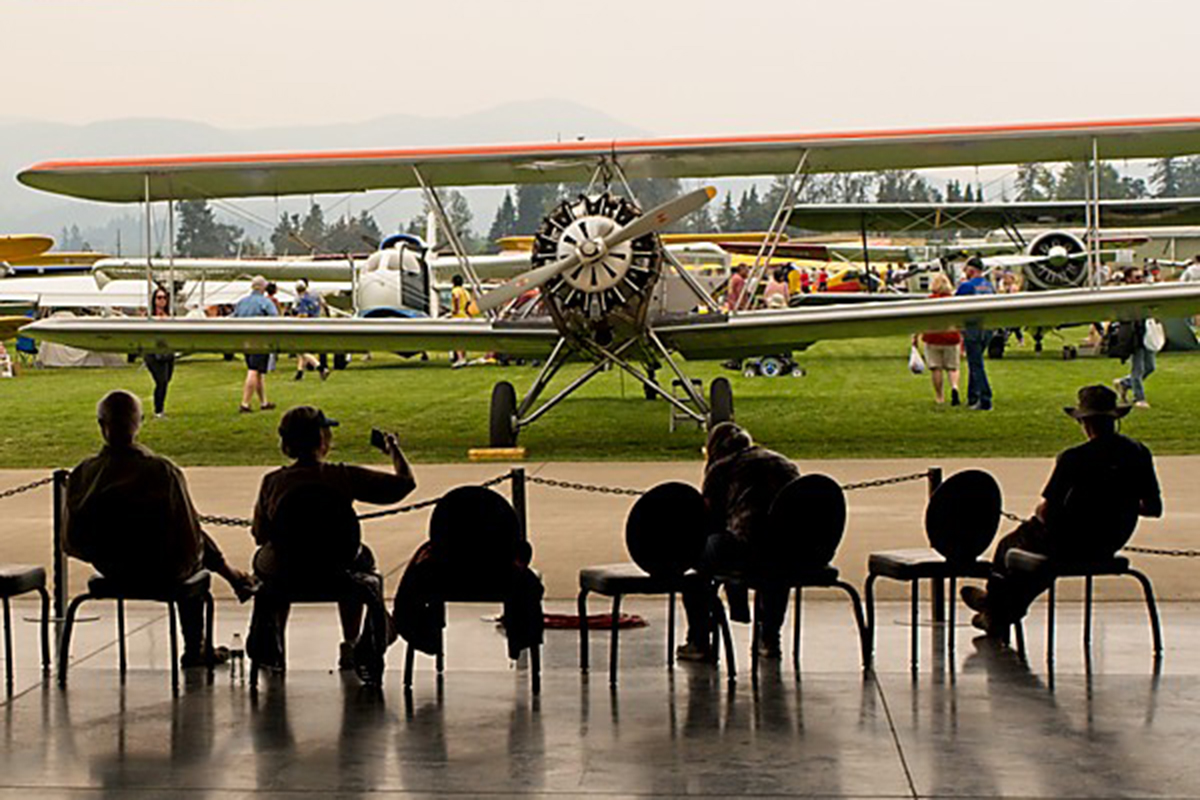 One of the challenges of flying a vintage aircraft is that, by modern standards, they are somewhat light on instruments which allow the pilot to safely fly through visual obscuration caused by clouds or smoke. , but that didn’t stop visitors from attending the annual Western Antique Airplane and Automobile Museum (WAAM) annual gathering held the weekend after Labor Day at Ken Airfield. Jernstedt / Hood River Airport (4S2).

“We have already had airline flights affected by adverse weather conditions,” says WAAAM director Stephanie Hatch. “If people cannot arrive by plane, they arrive by car. This year we had 200 planes, which is a pretty good number. They represented a good variety, we had older style biplanes and antiques that are near and dear to everyone, like the Stearman to modern aircraft.

It is estimated that around 2,000 people attended the event, which is a major fundraiser for WAAAM. The museum is located on the airport named after Oregon native Ken Jernstedt, who in 1941 resigned as a Marine Corps fighter pilot to volunteer with the Flying Tigers to fight in China. He is credited with multiple victories in the air and the destruction of 15 enemy aircraft on the ground. After the war he returned to Hood River and became a successful businessman.

The airport has a 7/25 paved runway measuring 3,040 feet by 75 feet and a grass runway along it, making it an ideal location for aircraft dating back to the golden age of aviation when the Grass tracks were the norm, not the exception. The airport is a towerless facility located along the Columbia River. The region is known for its rapidly changing weather conditions that often involve rain, fog, and haze, and pilots who fly the region regularly become adept at learning to read and assess weather forecasts.

The airport became a haven for vintage aircraft in 2007 when WAAAM opened. The museum was founded by Terry Brandt, an aviation enthusiast who wanted a lasting place for his aircraft collection and the ability to share it with others.

The annual fly-in/drive-in event attracts owners of vintage planes and cars from around the world to show off their machines.

Pilots often fly a day early and camp there. This year, an early arrival proved to be a good move as smoke from wildfires to the east and south filled the air over Washington and Oregon on Saturday.

The column of smoke stretched thousands of feet into the area. Throughout the weekend, a low-pressure system kept the particulate-laden air stagnant, causing ash to fall in some areas and reduced visibility – conditions not favored by any aircraft, and certainly not those which are often open-cockpit and require navigation by visual references.

Fly-in participants noted that the air directly above the airport was flyable, but pilots attempting to leave the area often turned around and returned, due to the wall of smoke they encountered. .

Pilots who were able to enter before the smoke subsided did so using the visual NOTAM, which clearly described visual reporting points near the airport, along with the warning that not all aircraft are equipped with radios – they are also not required to be as the airport is in Class E airspace – therefore all pilots have been reminded to be extremely vigilant.

The museum brings out its best

It’s not one of those air flights that depend on airplane tours, says Hatch, as the museum has more than 325 large artifacts that are preserved in flying and drivable condition. All they have to do is open the hangar doors and move the planes, motorcycles and cars up the ramp.

Among the rarest planes are the newly acquired Ford Tri-Motor, the crowd-favorite Stearman, and on the automotive side, a 1914 Model T Ford, a Studebaker and a handful of muscle cars from the late 1960s and early 1970s that make you want to reach for your bell bottom jeans and puka shell necklace.

About 97% of the planes and two-thirds of the cars belong to the museum; the others are on loan. The museum also exhibits vintage motors for gearheads that really want to dive into the heart of the machines.

One of the stars of this year’s event was the Ford Tri-Motor. When he drove off, people pulled out cameras and smartphones and captured video of him taxiing and taking off.

For people who wanted a new perspective on fly-in, there were also rides in the museum’s 1930 New Standard.

“It was the first time we could do this,” says Hatch. “Our team did an amazing job and a lot of people got to see the fly-in from the air which is really special.”

The Pacific Northwest has always had a strong vintage aviation contingency. For decades, Evergreen Field (59S) was located in Vancouver, Washington. The airport was founded in 1946 by Wally Olson. At the time, the airport was located outside the city limits. Olson made a name for himself as a flight instructor and it was known that if you wanted an antique plane you would ask Olson for advice because he knew who the best mechanics were, from the spinner to the tail and all the fabric between the two, you could get your plane repaired at Evergreen.

In 1964, the Northwest Antique Aviation Club (NWAAC) was founded in Evergreen. Once a year, pilots came from all over to show off their dawn of flight and the golden age of aviation machinery and swap stories of pilots sitting on a bench under the “tree of knowledge”. The event was known as the Evergreen Fly-in.

Over the years, the open space that surrounded Evergreen Field gave way to homes and industrial development. At the time of Olson’s death in 1997, the airport was surrounded by suburbs. His heirs continued to operate the airport, but soon considered closing it and selling the property. In the early 2000s, the NWAAC began looking for other venues to host the annual Antiques Air Show, eventually settling on Hood River. Evergreen Field was closed in 2006 – WAAAM opened in Hood River in 2007 with the first annual Hood River Fly-In.

WAAAM director Hatch said the museum is helping to fill the void left by the loss of Evergreen Field.

“You could say we’re the successor to the Evergreen Fly-In,” she says, adding that the facade of Olson’s wooden hangar was saved from the bulldozer and is on display at WAAAM, much to the delight of visitors who recognize the wooden doors and are forced to share a story about Wally.

It’s not all fun and games at the fly-in – pilots have the opportunity to attend informative seminars on safety topics. There is always plenty of food, usually set up by service clubs. But for the most part, the weekend is about seeing planes that represent aviation history and allowing pilots to share their stories with visitors.

Visitors were also encouraged to vote for their favorite aircraft – this People’s Choice award is coveted among visiting pilots. The winner gets a trophy.

This year, the 1931 Student Prince owned by Summer Martell of Port Townsend, Washington, won the honor. When asked about the PCA, Martell responded with an Oscar-style acceptance speech, saying, “I want to thank God and Kinner Engines, and my wallet.” The student prince also won the award for best antique.

Martell is a corporate pilot who has been flying since she was a teenager. She was brought into aviation by her father, who told his daughter he had decided to buy the Student Prince when he saw it in an open hangar and, “The plane smiled at him.”

When she was 18 she was on the TV show North Exposure. The TV show was set in Alaska, but was actually filmed in Rosalyn, Washington. Martell was Maggie’s double pilot, the character who was a bush pilot in Alaska.

Martell, who is also a Designated Pilot Examiner, was encouraged by the number of young vintage aircraft owners present at the fly-in. “There were a lot of them in their twenties. It made me happy to see young, young men and women in vintage aviation,” she said.

Pilots like to prank each other, and Martell inherited his father’s playful sense of humor. During the flight, she pranked a number of pilots using a toy snake that she herself had been pranked with in 2012 by a CFI who surreptitiously dropped the fake cobra in her flight bag. (Martell discovered the snake a month later during a checkup, letting out a cry that startled the applicant, bringing much-needed levity to a stressful situation.)

Using her People’s Choice trophy as a microphone, she channeled for Dateline NBC as she interviewed one of the stuffed pilots.

Fundraising at the Fly-In

As this story was to be published, revenue from this year’s event was still being calculated, but has already been earmarked for museum expansion.

“We need space,” says Hatch. “We don’t want to take out a loan or borrow money, so we raise the funds we need plus 20% before we even start work.”

If you want to participate in the annual fly-in, mark it on your calendar now – the event always takes place the weekend after Labor Day.