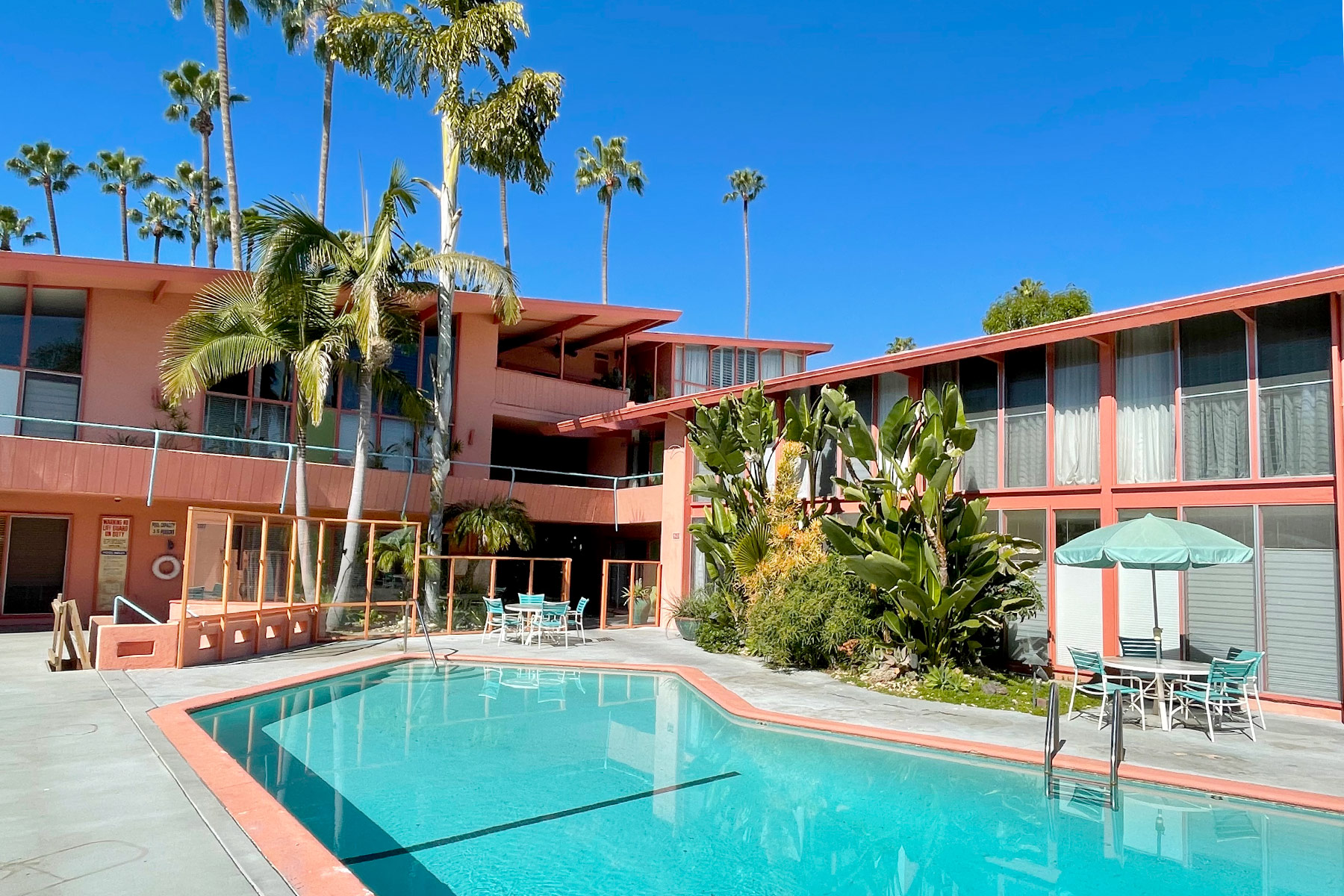 You can never really go home again, but you can sometimes visit as a tourist. I had the pleasure of doing just that a few weeks ago when I was able to revisit the old apartment building where I once lived at 1400 Hayworth Avenue in West Hollywood, CA. Built in 1954, it is a marvel of expressive modernism made with mostly ready-made materials. After all these years, it retains its original shape and color, with only an ugly pool enclosure to taint the dialogue of diagonals and the chic organization of simple living blocks that fascinated us every day we lived there at early 1990s.

Edward Fickett, the architect of the building, was then a forgotten character. Although he designed thousands of homes and apartment buildings throughout Southern California, he was involved in the layout and planning of some of its most famous developments, such as Trousdale Estates, and was the architect of two hedonistic oases such as the Costa Mesa Country Club and more. prosaic structures like the original buildings at Edwards Air Force Base, its reputation was eclipsed by the second-generation modernists that historian Esther McCoy had favored and participants in the Case Study Program of the 1950s.

The main reason Fickett wasn’t taken seriously for so long was that he designed in volume and for mainstream clients, rather than focusing on producing a few masterpieces. He typically worked on a budget, and often for commercial developers, so the beauty of his work was part of the overall landscape you’d see along the Sunset Strip (where he designed what later became Spago, the restaurant by Wolfgang Puck, among other structures) and the boulevards of the San Fernando Valley. Many of its structures are not particularly noteworthy, although a few are. His recent rehabilitation, which led to a monograph and his archive housed at the University of Southern California, means that now buildings he never or barely touched are attributed to him.

Living on the Riviera made us feel like we were part of LA; rooted in its landscape, both man-made and natural, and part of the excitement and glamor that has made Southern California a dreamland.

The building at 1400 Hayworth, or Hollywood Riviera as it’s officially known, is notable for the way it responds to the landscape and opens up generous shared spaces within its grounds. Its main feature is a front block with a steeply pitched roof that accentuates the gentle rise of the street and gestures towards the jagged hills to the north. Enter under this front slab of two-storey apartments, past a garden of banana trees and through a basement with an exterior cantilevered staircase and pilings, and you find yourself in a vast enclosed courtyard of the the other side by the less jazzy shapes of the rows of apartments (now condominiums). Even here, Fickett enlivened the forms with sloping railings and open corners. The dusty pink or red color of the entire resort enhances its sense of glamour, as do the curves of the pool.

The most striking spatial feature of the Riviera, beyond its sloping facade, is the slot next to the bridge that opens to the parking lot below. Fickett took advantage of the slope of the site to allow you to access the lower level of the garage directly from the street. He then left this car storage open to the spaces above, so you can see the complex when driving and the automobiles, essential status symbols in Los Angeles, are visible from the apartments. It is typical of his work. Rather than hiding car culture or relying on street signs, Fickett embraced the need for shapes that would both express the excitement of the modern world and make his tools visible, while allowing you to understand and be part of the geology of the site.

The qualities of the Riviera have not gone unnoticed. Over the years it has served as the setting for films such as like Bill and Ted’s Bogus Journey and LA’s storyas well as for the more recent television series Transparent. It also helped keep condominium fees low and convinced unit owners, who moved there at least in part for the design, to preserve the resort’s original look and feel.

When we moved into the unit at the top of the front slope in the early 1990s, we received permission to make a very visible modification: we glazed the back porch to create a bedroom 7 feet wide and 20 feet long. with glass on both sides reaching all the way to the top of the sloping roof. From there we had a view of much of Los Angeles and, on a clear day, almost to the ocean.

Living on the Riviera made us feel like we were part of LA; rooted in its landscape, both man-made and natural, and part of the excitement and glamor that has made Southern California a dreamland. We also experienced the other side of Southland, watching the fires burn after the 1992 civil unrest after a jury acquitted police bids that beat Rodney King to cling to the frame of the door during the Northridge earthquake in 1994. We also faced the daily annoyance of traffic jams for Director’s Guild of America events in the neighborhood and rock ‘n roll neighbors when returning from a night on the strip. To be open meant to see and be seen, and to be part of both the good and the bad of Los Angeles, albeit from a distance.

I was able to revisit the building because a documentary on Fickett is in preparation and I was interviewed for this film. I found the place not only in good condition, but expensive to the point that I could never live there again. Midcentury Modern has regained its place as the perfect style for Southern California, but now only for the felite. I can only hope that because of its popularity, the clarity, simplicity and expressive response to the context that the Riviera represents and much of Fickett’s work can be developed into a vernacular that is both enduring and more accessible to everyone. The building blocks of such an economic and democratic construction are certainly there, waiting for their forms and strategies to be deployed on the slopes of Southern California.

The opinions and conclusions of this author are not necessarily those of ARCHITECT magazine or the American Institute of Architects.