Oct. 12, 2022 (Alpine) — Voters are often frustrated when trying to get information on judicial candidates because they are barred from answering questions about issues that may come before them in court. But at the voter nominee forum at Alpine recently, Superior Court judicial nominees Pete Singer and Rebeca Kanter provided details about their backgrounds and experience that gave a clear insight into their core values ​​and qualifications. .

Pete Singer is running for seat 36 of the Superior Court, which is currently vacant.

“Of all the people you vote for, judges are the most likely to touch your life,” Singer says.

“I have the legal experience. My opponent has none,” he said. 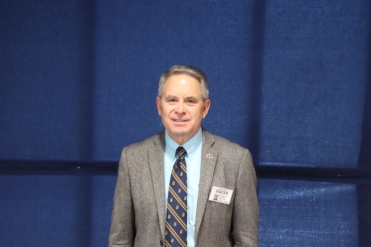 For the past eight years, Singer served as a commissioner in San Diego Superior Court. Commissioners are the “worker bees” of the court and are elected by the judges, Singer says.

He is also a faculty member at the Judicial College of California, where he teaches judicial orientation to new judges and commissioners. In 2019, he was honored as California Court Commissioner of the Year.

While he currently deals with criminal offenses as a commissioner, he has previously worked in private practice in civil matters, real estate and guardianship, particularly with people facing mental health issues and homelessness, as well as drug addiction.

Governor Newsom’s newly approved care court is set to roll out to San Diego next summer, to ensure people with mental illness and addiction get help off the streets. “That’s my goal. That’s where I need to be. The Superior Court will need multiple judges to fulfill that role,” he revealed.

Singer says he has also spent “his whole life” as a community volunteer and continues to volunteer as part of his teaching duties. His volunteer service includes the Downtown Lions Club, where he helped secure 131 housing units for low-income seniors.

He notes that the bench is currently tilted towards more prosecutors than judges from other backgrounds. He expressed concern about high fines which may be more than some can afford to pay for minor offenses – fines so high that paying them could mean not being able to pay rent, for some defendants .

“Everyone who comes before me has options,” he says. This could include picking up trash instead of paying a fine. He won’t impose fines on minors because he doesn’t want parents to write a check; instead, it requires those under 18 to perform community service. In one case, however, where a medical condition made this impossible, he asked a teenage girl to write a report on the danger of teenage driving. “She came back to me a week later and asked me to read it aloud,” he recalled. “She received a standing ovation from everyone in court. She learned a lesson, and so did the others.

Although the court races are nonpartisan, it is endorsed by the Democratic Party, the San Diego County and Imperial County Labor Council, and many judges and commissioners.

“To be a good judge on the bench, you have to love people,” he concludes, adding that this means looking out for the interests of people, not corporations or organizations. “We are dealing with people in the worst circumstances of their lives,” he says, adding that his campaign is mostly self-funded.

He ended his presentation by quoting the poet Rabindranath Tagore, Nobel Prize in Literature: “I slept and dreamed that life was joy. I woke up and saw that life was a service. I acted and behold, the service was joy.

Rebecca Kanter is running for the Superior Court 35 seat.

“Now, more than ever, decisions made by judges can affect your life,” she says. 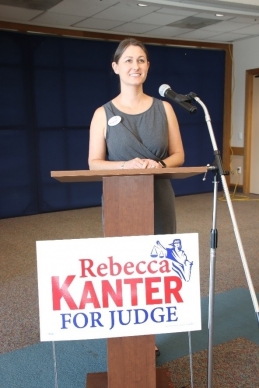 She served as an Assistant United States Attorney for 16 years and currently handles major fraud and public corruption cases. She also served as Civil Rights Coordinator and Ethics Advisor for the US Attorney’s Office.

She prosecuted hate crimes, civil rights violations and a fraud case in which taxpayers were defrauded of money intended for veteran-owned businesses.

After graduating from UCLA Law School, she served as a court clerk and in private practice. She teaches as an adjunct at USD Law School and previously taught in UCLA’s Women’s Studies program. Currently, she is a Pro Tem volunteer judge at the San Diego Superior Court. She has also won county and federal bar service awards.

She has been an active volunteer in many organizations, including serving on the board of directors of the Lawyers Club and the Association of Women Lawyers. She co-chaired the Reproductive Rights and Advocacy Committee to support the rights of girls and women. She also co-founded the San Diego Leadership Alliance.

His father was a marine biologist, who taught him the values ​​of protecting our environment. His mother worked in the auto industry in Detroit. Kanter has been active in the Labor Day program and says she has long been committed to advancing opportunities for women.

She is endorsed by 35 current or former judges and has been rated well qualified by the San Diego County Bar Association. It is also endorsed by Congressmen Sara Jacobs and Mike Levin, as well as the Labor Council.

She expresses concern over unlimited corporate donations in court races. “My opponent asked a single company to donate $50,000 and invest about $20,000 on their side,” she notes, adding that despite this, she raised more funds than her opponent for the race. judiciary that spans the entire county and has more voters than congressional districts.

Superior Court justices are elected for six-year terms, but are rarely contested and almost always re-elected, so “in reality, you’re putting them in office for much longer than six years,” observes Kanter.

Meet DieTim: The Fitness Content Creator You Should Know