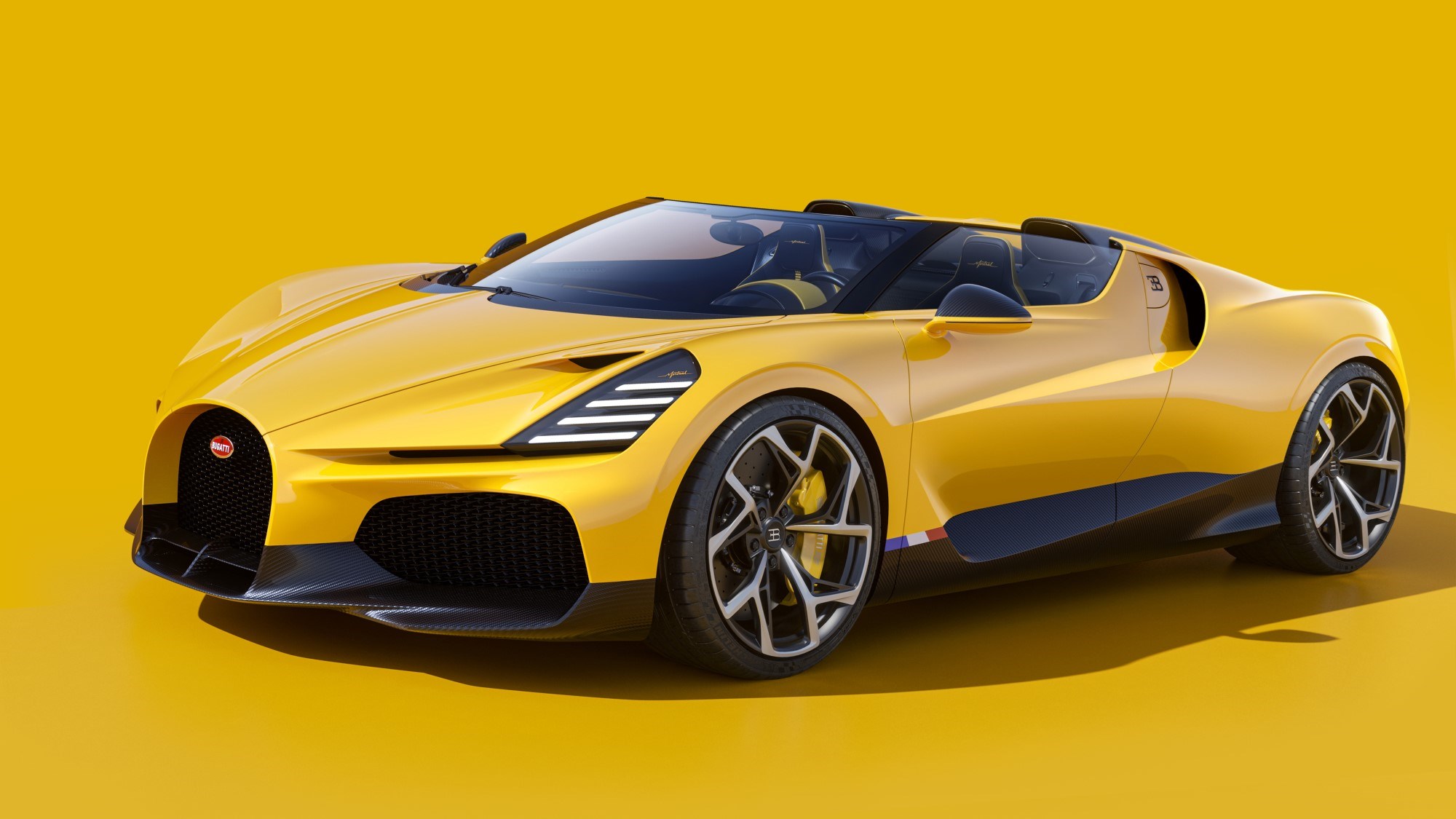 This is the Bugatti Mistral, a W16-powered roadster that is to the Chiron what the Veyron Grand Sport was to the regular Veyron.

It’s also an indication that Maserati’s copyrights to the Mistral name have been exhausted, allowing Bugatti to join a selection of VW Group cars named after winds such as the Golf, Jetta, Bora and the Scirroco. Less flippant, the name hints at the car’s ‘wind in the hair’ design – although there’s a roof, it’s more intended for temporary or emergency use. It is above all a convertible car.

Mistral is also a French wind, blowing from the Rhone Valley across the Côte d’Azur and into the Mediterranean. And despite German ownership and a Croatian CEO, the brand is very proud of its French heritage and would like to be considered a French car brand.

It will be presented to the public during Monterey Car Week, at The Quail – but there will be no point in rooting to the back of the couch trying to jack up the Mistral’s 5 million euro price tag, as the 99 copies have already done so. been sold.

So it’s a convertible Chiron?

Kind of. The Mistral shares a lot with the Chiron and looks quite similar, but Bugatti is keen to point out that they haven’t just taken a hacksaw off the roof – it’s been redesigned and redesigned. Roadsters are rarely an afterthought for the marque, and in fact 45% of all Bugatti vehicles ever created have been open-topped.

The front of the Mistral adopts a more vertical pattern than that of the Chiron, with stacked headlights and a deeper and wider horseshoe grille, closer to exclusive models like the Divo or La Voiture Noire.

The windscreen and the upper line of the windows give a real wraparound “visor” effect, hiding the A-pillars and offering a modern interpretation of the “Grand Raid” Type 57, a 1934 roadster bodied by Gangloff. The Grand Raid also provides the color scheme of the first Mistral, which is a warm black with yellow accents. It’s a personal tribute to Ettore Bugatti, who chose yellow and black for several of his own cars.

Of course, customer cars will be painted in the desired shade, with launch models rendered in Chiron Blue, black and white.

The airflow has been very carefully divided with clever aerodynamics. The engine air intakes are now on the roof, just behind the occupants’ heads – another nod to the Veyron Grand Sport. They are also strong enough to serve as rollover bars.

This leaves the air on the sides free for the oil coolers. The taillights adopt an “X” shaped pattern and the negative space between them is used to ventilate the side radiators.

Even the headlights have gaps between the LED bars, which channel air through the wheel arch to improve aerodynamic drag.

What’s under the hood?

You’ll find the Super Sport powertrain mounted just behind the driver, namely Bugatti’s 8.0-litre W16 engine, producing 1600bhp (1578hp) here. Bugatti is aiming for a top speed of 261mph, which, while not the fastest open-top car ever, doesn’t mean it’s no slouch.

It’s the last time this engine will be used in a road-going Bugatti – the end of an era that began with the Veyron in 2005. The design team has been very quiet about the future, saying only that it would be hybrid – but didn’t seem oversold on the idea. As design chief Achim Anscheidt admitted “I can stand here and give you all the talk on the design, but without the W16 engine this car has no selling point”.

“We know the W16 Mistral will always have significance in Bugatti history, marking the last time that perhaps the greatest automotive powertrain ever was used in the production road car.”

When pressed further, Bugatti executives stuck to the company line, saying only that the new hybrid powertrain would “pay homage to Bugatti”.

The interior is very similar to the Chiron, with titanium and aluminum components machined into a simple, curvaceous dashboard. What you won’t find is inch after inch of screen – Bugatti wants its cars to be collectables that will perform just as well many years later, which it doesn’t think it can do if the interior relies on fiddly screens and cumbersome software.

Anscheidt admits that most of Bugatti’s fabulously wealthy customers use their smartphones for navigation if they need to – just like the rest of the plebs – but that driving one of their cars is a consciously tech-free experience. They prefer exquisite materials and craftsmanship over the latest technologies that will soon seem outdated. After all, very few Bugattis are daily drivers – a suction cup phone holder would rather spoil the effect.

‘Will a screen still work as well in 15 or 30 years?’ he asks. “Even a Bugatti made today should be able to sit on the Pebble Beach lawn 30 years from now and still be running.”

The color scheme inside is once again inspired by warm black (with brown tones) and yellow. Fabulous “woven” leather appears on the seats and door cards. Handmade, of course – machine-cut experiments were too regular and boring.

Another nod to the past is found in the gear selector, where a dancing elephant figure is encased in amber-like resin. It is a tribute to the famous sculpture by Rembrandt Bugatti, copies of which adorned the bonnet of the Type 41 Royale in Ettore’s homage to the work of his brother.

Can I have one?

No. All 99 examples were sold out before the public reveal (when we saw the car at a media event a few weeks ago, Anscheidt was confident they would be) and even if you did end up on this exclusive listing, you would have to pay 5 million euros for the privilege.

Most ended up as exhibits in private collections – automotive art, designed to be admired first and driven second. Too bad, given that this is the last outing of this glorious engine.

Mate Rimac, CEO of Bugatti Rimac, said: “The union of a roadster format and our W16 powertrain is absolute perfection. With the roof removed and a pair of large air intakes directly behind your head feeding approximately 70,000 liters of air through the engine every minute at full throttle, driving the W16 Mistral connects you to the complex workings of this revolutionary powertrain. like no other Bugatti to Date.’