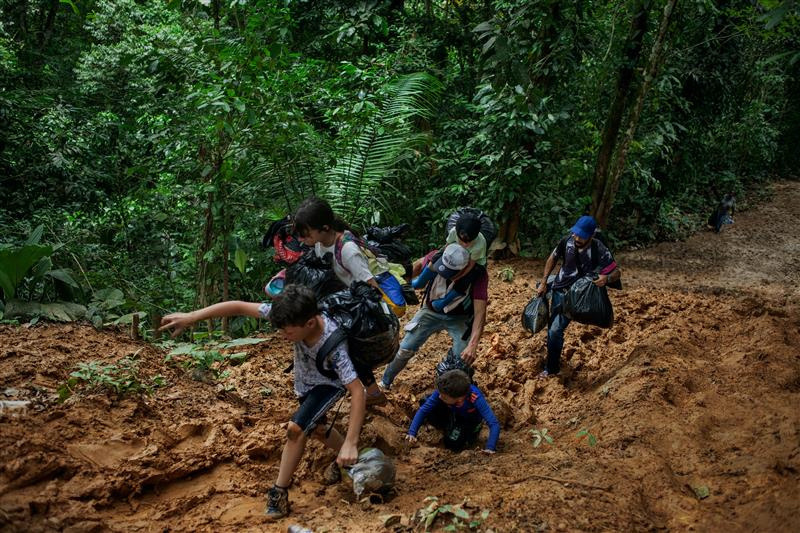 Sight Magazine – Darien Gap: On a treacherous hike, migrants risk everything for the American dream

Five months pregnant and dragging a heavy backpack through an anarchic stretch of the Colombian rainforest, a migrant woman from Angola says “no” for the second time to the jungle porter who offers to carry her bag for 20 dollars.

“It’s going to get harder, more mountains ahead of us,” the burly local man warns at the start of the 96-kilometre hike through the wilderness to neighboring Panama. But she shakes her head and plods along the steep, muddy path.

A Venezuelan migrant family with young children walks through the Colombian jungle in the Darien Gap on the first day of a treacherous and grueling five-to-seven-day trek through the Darien Gap, Colombia, on July 27. PHOTO: Thomson Reuters Foundation/Fabio Cuttica

In front of them and behind them, a sparse column of dozens of men, women and children weave their way through the Darien Gap – a perilous road in the jungle without roads taken by a record number of migrants determined to reach the United States. .

Some hold babies and toddlers, others hold machetes to defend themselves from snakes, but many are ill-equipped for the multi-day trek in which at least 51 migrants died or went missing last year, according to the UN migration agency.

“I seek greener pastures. A better life. I have been told the road is not easy.”

Among the group are two brothers from a Nepalese farming family. Using their small plot of land as collateral, their parents took out a $6,000 loan to pay for the brothers’ trip in search of work.

There are also impoverished Venezuelans fleeing years of political and economic chaos, a former Congolese boxing champion and young men driven from their homes by the conflict in Cameroon and the return to power of the Taliban in Afghanistan.

A record 133,000 people crossed the Darien Gap last year, including 29,000 children, according to Panamanian authorities.

In August alone, a record 32,000 migrants crossed the Darien, 40 times more than the same month last year, according to Human Rights Watch.

Drenched in sweat and carrying a bag with a tent and canned goods, Abdu, a 24-year-old agriculture student from Ghana, lived for several years in Brazil before deciding to move to the United States.

“I am looking for greener pastures. A better life. I have been told the road is not easy,” Abdu said. 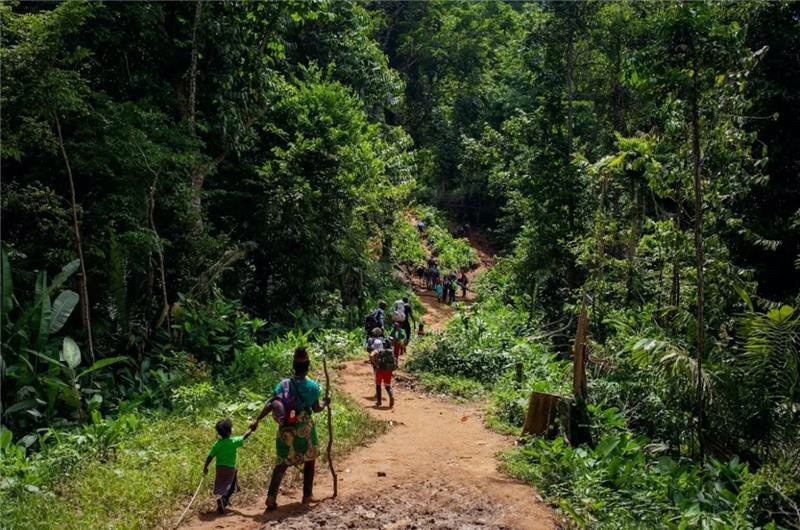 Migrants walk through the Colombian jungle on the first day of a perilous five-to-seven-day trek through Colombia’s Darien Gap on July 27. PHOTO: Thomson Reuters Foundation/Fabio Cuttica

Many migrants from Africa and Asia fly to Ecuador and Brazil where few visa restrictions allow an easy entry point into the Americas. From there they head north.

Venezuelans have overtaken Cubans and Haitians as the largest national group making the crossing this year, as new visa restrictions imposed by several Latin American countries make it harder for them to travel to Mexico and Central America. . Some six million Venezuelans have fled their homeland since 2014.

With rising inflation and unemployment in Latin America and hopes that US President Joe Biden will grant more Venezuelans temporary protected status or asylum, many Venezuelans are on the move again.

Wilbar, 19, who was traveling without a passport and had $90 stashed in his Bible, left Venezuela when he was 15 and has been working on construction sites in Colombia ever since.

To pay for the trip, he slept rough for several weeks to save on rent and camped on the beach in the Colombian resort town of Necocli – a gateway to the Darien – where he earned $30 recycling plastic and cardboard for a few days.

“There are better opportunities in the United States… My goal is to buy my mother and sister a house in Venezuela,” Wilbar said, his small backpack wrapped in plastic to protect him from the humidity and frequent showers in the forest.

Like many migrants, Wilbar has seen videos on TikTok of the perilous journey showing migrants lying exhausted in the mud, or children nearly swept away by the current of crocodile-infested rivers. 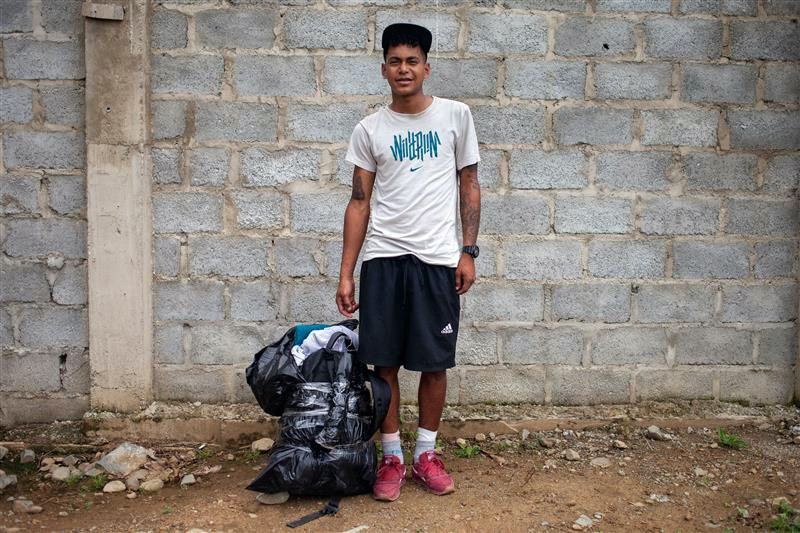 Wilbar, a 19-year-old Venezuelan migrant traveling with a group of Venezuelan families, at a campsite in the Colombian town of Capurganá, standing next to his plastic-wrapped backpack to protect it from the rain before starting the hike through the jungle through the Darien Gap. Capurganá, Colombia, July 27. PHOTO: Thomson Reuters Foundation/Fabio Cuttica

Even for relatively young and fit people, the trek is a test of endurance.

Less than an hour later, the people weighed down by heavy loads and six-litre water bottles were already struggling and needing frequent breaks.

The bags are made lighter. Non-essential clothing, shoes and luggage are left behind and litter the forest floor.

For Necocli and the nearby tourist town of Capurgana, a local economy replacing Colombian pesos with US dollars has flourished to cater for the hundreds of migrants crossing each day.

In Necocli, migrants have overtaken tourists as the main driver of the local economy.

“Before, we had to wait for the tourist season. Now we don’t have to because there are migrants all year round…the migration will never end,” said hostel owner German Julio.

About 750 migrants on average a day have passed through the city this year, said Wilfredo Menco, head of the ombudsman’s office at Necocli, a government human rights agency. 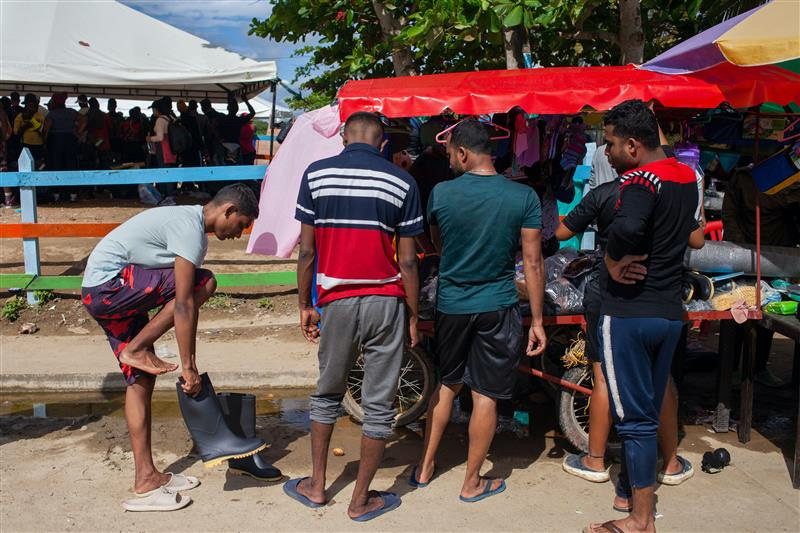 Migrants from Nepal try on rubber boots and buy a jungle kit to prepare for the jungle trek through the Darién Gap in the Colombian seaside town of Necoclí. Necoclí, Colombia, July 26. PHOTO: Thomson Reuters Foundation/Fabio Cuttica

Jungle guides and porters, boat companies, owners of inns, restaurants and pharmacies, as well as street vendors and money changers all cash in, often in dollars.

“I used to be a housewife and had no job,” said Graciela Leon, 63, who runs a stall along the Necocli beach promenade selling machetes, tents, boots rubber and other jungle supplies.

The migrant route is a multimillion-dollar business and increasingly lucrative side business for the infamous Gulf Clan, Colombia’s largest and most powerful drug cartel, locals said, although that most are reluctant to discuss the details.

The cartel controls who enters the Darien Gap and reduces revenue for most local businesses, including those that serve migrants. 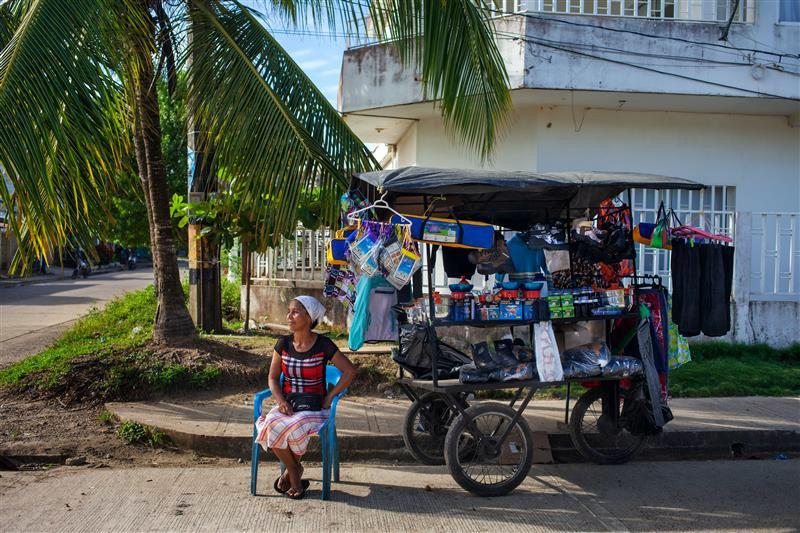 Asking not to be identified for fear of reprisals, several people said the cartel charged a 20% protection tax, known locally as a “vacuna” or vaccine.

“Not a leaf moves without their permission,” said an aid worker who wished to remain anonymous.

But state authorities are largely absent from the area and tend to let migrants through to the Darien Gap.

From Necocli, migrants wearing life jackets wait in an orderly line to board the same comfortable boats used by tourists to cross the Gulf of Uraba. They pay $40 for a two-hour ride to reach Capurgana, where the jungle trek begins.

Here they hand over around US$160 each to be led through the jungle by organized teams of “guides” as the local smugglers call themselves.

In Capurgana, where the jungle trek begins, elected community leader Carlos Alberto Ballesteros is in charge of 30 guides, who each lead groups of around 25 migrants.

He went to great lengths to emphasize that migrants are not abused, dumped or injured along the Darien.

“We want it to be recognized that we care for migrants and that this is not human trafficking,” he said. 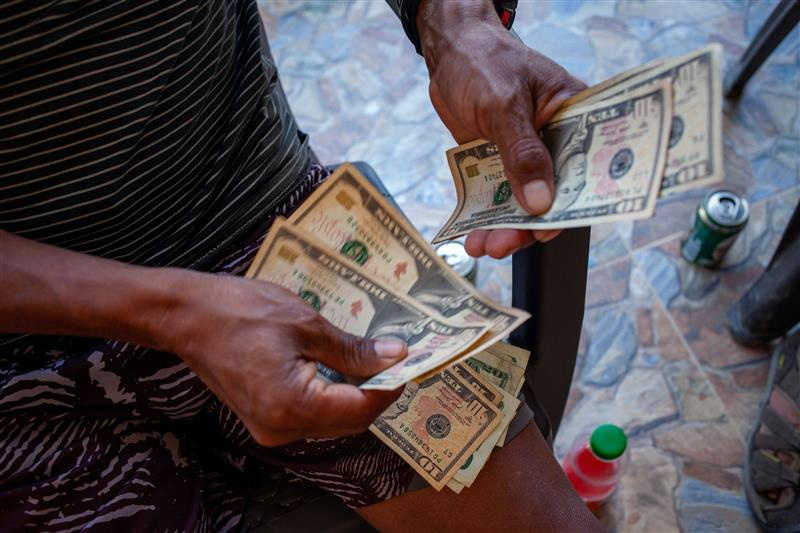 Colombian Carlos Alberto Ballesteros, an elected community leader and guide, hands out dollar bills to several Panamanian indigenous leaders on the porch of his home in the Colombian town of Capurganá on July 26. Indigenous leaders receive a share of the guide fee for each migrant who passes through their territory. PHOTO: Thomson Reuters Foundation/Fabio Cuttica

Yet the United Nations and aid groups warn that many migrants face extreme violence at the hands of armed bandits along the Darien Crossing.

The medical association Médecins Sans Frontières, which runs two migrant reception centers in Panama, said that 81% of its patients seen from April 2021 to June 2022 had witnessed and/or suffered some type of violence while throughout the trip.

“Migrants told us they saw people being killed along the way. They had their money stolen, and even food, medicine and boots,” Quiceno said. 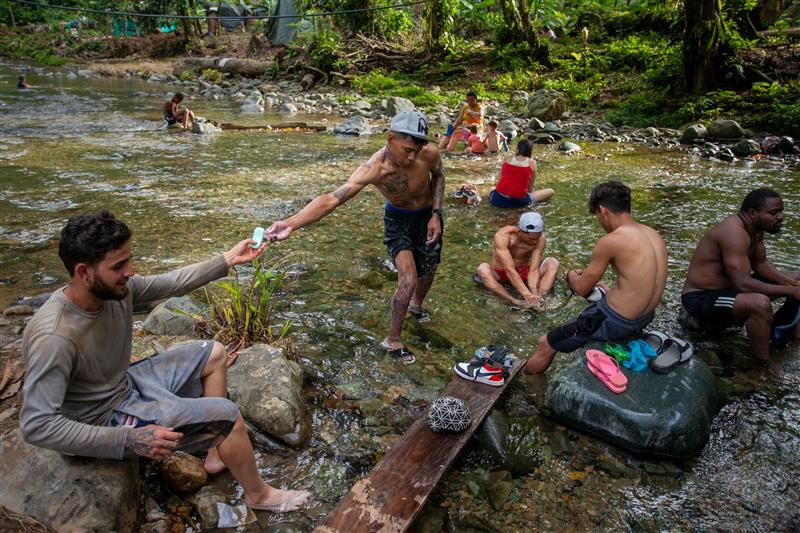 Migrants from Venezuela and African countries take a break and bathe in a stream at the first camping site after a day of trekking through the Colombian jungle in Darien Gap, Colombia on July 27. PHOTO: Thomson Reuters Foundation/Fabio Cuttica

Back on the trail as dusk approached, at the first campsite, dozens of weary migrants pitched tents and lit camp stoves to cook while children waded in a nearby river and others washed away the mud of their arms, feet and legs.

“People say ‘how can you do that with children?’ But it’s more painful to leave our children in Venezuela,” said Macyuli, a migrant traveling with her four children and her husband.

When crossing the jungle wall, migrants still have to travel around 4,000 kilometers and five borders across Central America before reaching the most difficult barrier of all – the US-Mexico border.

“We go with the hand of God. The lord is our guide,” Macyuli said, resting on the bank.

Below, Venezuelan migrant Macyuli, traveling with her four children and her husband, and other Venezuelan families, walks along the jungle path through the Darién Gap carrying her daughter. Darien Gap, Colombia, July 27. PHOTO: Thomson Reuters Foundation/Fabio Cuttica. 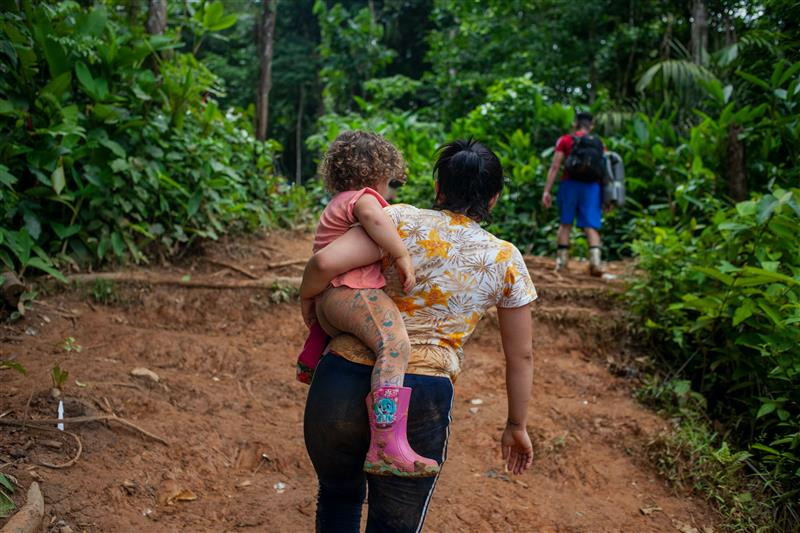