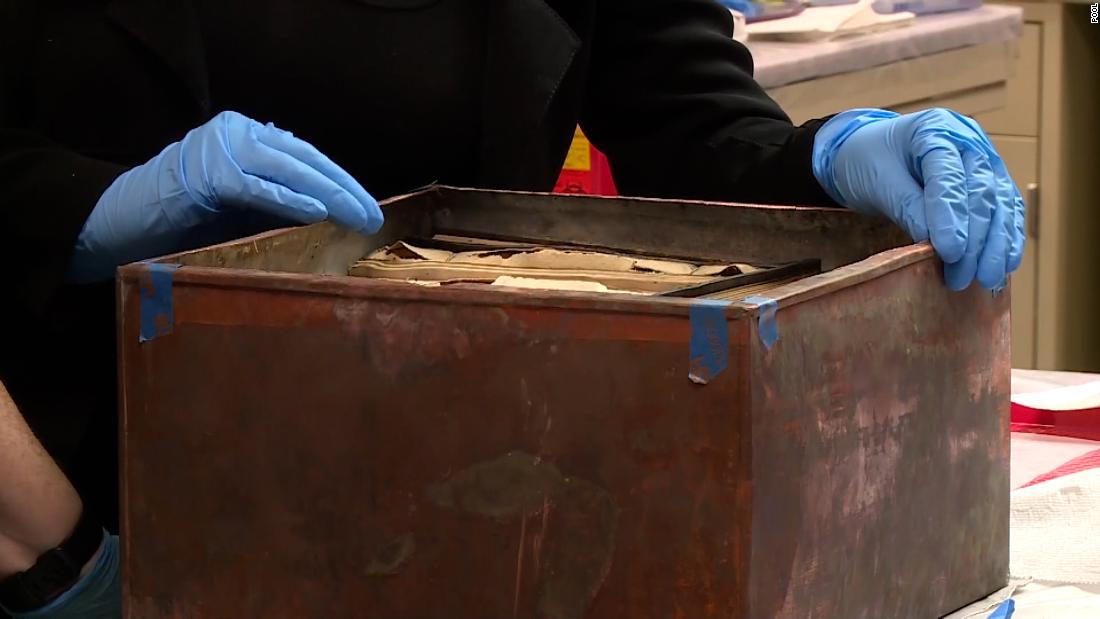 Articles inside included an 1865 edition of Harper’s Weekly magazine with a clear image of a figure weeping at Abraham Lincoln’s grave; a Bible with a coin stuck on it; and a Richmond directory.

More newspapers, books, coins and letters were also found. A mined bullet, a type of bullet commonly used during the Civil War, has also been discovered.
Conservators at the Virginia Department of Historic Resources (DHR) carefully opened the box and worked with caution. Water was found inside the box and its items had dilated, making it difficult to remove.

Kate Ridgeway, archaeological curator from Virginia and who led the opening of the box, said the artifact was “a little wetter than we had hoped.”

The crews will now continue to work on the preservation and search for the artifacts that were found inside the capsule over the next few days and weeks.

History of the second time capsule

This capsule was a copper box, while the first – opened earlier in December – was a lead box. The two were found where the statue of Lee once stood, a spokesperson for the Virginia Department of Historic Resources said Monday.

The copper box, according to DHR director Julie Langan, weighed 36 pounds and measured 13.5 inches by 13.5 inches by 7.5 inches and was found in an area of ​​high humidity.

“We thought it would be soup, but it’s not soup,” Ridgeway said.

The capsule was then taken to DHR’s conservation lab where curators began to evaluate it, Langan said.

The Richmond Bomb Squad was first consulted to ensure it could be opened safely.

“This is a second time capsule and probably the one that is known to have been placed in the pedestal,” Langan said. “The one recovered last week was unexpected and probably left behind by men involved in the construction.”

The first container was found on Dec. 17 as workers dismantled the statue’s 40-foot pedestal on Monument Avenue in Richmond, according to a press release from the office of Virginia Governor Ralph Northam.
The 12-ton statue of Lee on his horse, which was taken down in September, had become a focal point for racial justice protests in Richmond, the former capital of Confederation.

The first capsule was found in the pedestal tower, about 20 feet above ground level. Among the items found inside were an 1875 almanac, two withered books, a coin, and a cloth envelope.

Historians believe the first time capsule was placed on October 27, 1887, and included about 60 items donated by 37 Richmond residents, many of which were Confederation-related, according to the governor’s office.

The state plans to store the pedestal until authorities decide what to do with the partial monument.