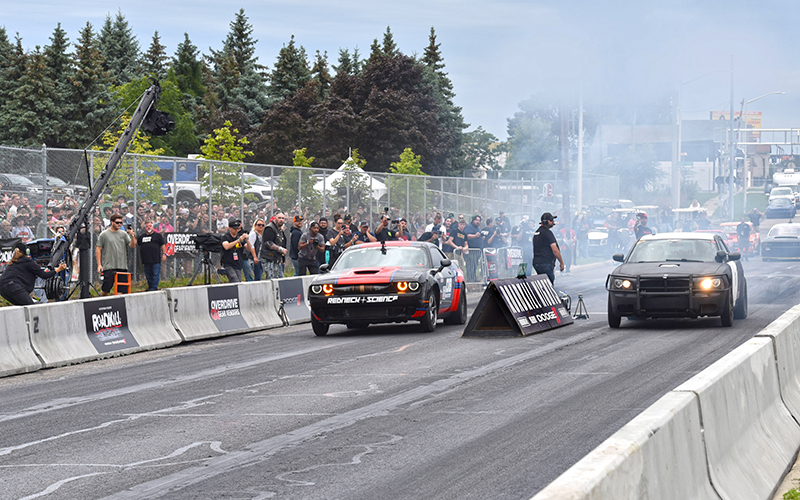 For its seventh iteration, MotorTrend Presents Roadkill Nights Powered by Dodge drew a one-day attendance record of over 40,000 to the M1 Concourse in Pontiac on Saturday, August 13, for the annual street drag racing festival.

“This is the seventh year of MotorTrend Presents Roadkill Nights Powered by Dodge and what a difference – we went from racing in the parking lot of an abandoned stadium (former Pontiac Silverdome) to legal street racing on historic Woodward Avenue, with M1 Concourse serving as an incredible stage for our power circus,” said Tim Kuniskis, CEO of the Dodge brand.

The event, which also drew more than a million views online, transformed historic Woodward Avenue into an 1/8-mile straight drag strip that included 115 street-legal drag racers. , while spectators had the chance to get their adrenaline pumping. and drift rides in Dodge Challenger and Dodge Charger SRT Hellcats and Ram TRX trucks on Concourse M1.

The nine competitors – Tavarish, Westen Champlin, throtl, Christina Roki, Demonology, Corruptt Builds, Collete Davis, David Patterson and Alex Taylor – were given the challenge to build and run a Direct Connection checkout engine that they could modify at their way. However, they had the added challenge of competing with a Direct Connection six-speed manual transmission, and within a budget of $10,000.

Defending champion, drag racer, mechanic and co-host of MotorTrend’s “Hot Rod Garage,” Taylor matched his 1955 Plymouth Savoy against Champlin’s 2016 Dodge Challenger, which beat seven other automakers in eliminations for the right to face Taylor in the Finals. It was Taylor who took the win again, throwing hard and edging Champlin to the finish line.

“It was great to see thousands of Dodge enthusiasts come out to the event and cheer on Alex Taylor as she defended her crown and took home victory in the Dodge Direction Connection Grudge Race,” said Kuniskis. “We’re going to give performance enthusiasts even more enjoyment as we step on the pedal for Dodge Speed ​​Week, with three separate nights of product presentations around the world and a full brand display on Woodward Avenue during the Dream Cruise weekend on August 20.”

The Big Tire and Small Tire classes saw 115 competitors battle it out for bragging rights and cash prizes totaling $30,000 on the 1/8 mile drag strip on Woodward Avenue, with unique urban features, including an active railway located just behind the starting line. Each class winner won $10,000, with the fastest Dodge cars in both classes taking home $5,000 each.

“Roadkill Nights brings ‘Roadkill’ inspired car culture to life with the thrill of high-speed drag racing, which is why 40,000 performance enthusiasts flooded the doors this year,” said Eric Schwab, Vice President Senior MotorTrend Group and Head of Revenue, Operations and Partnerships. “There’s something for everyone at Roadkill Nights – drag racers, performance enthusiasts, families and anyone just looking to have a great day at an iconic venue.”

In related news, M1 Concourse is hosting the Woodward Dream Show on Friday, August 19 from 10 a.m. to 10 p.m., featuring a number of “must-see” cars, including two of the 32 vehicles on the National Register of Historic Vehicles.

A detailed program of the event is below:

11 a.m. — The Biergarten opens in the arena (next to the stage) and the M1 competition will begin offering sprint experiences on the north loop of the track.

12 p.m. — A live unveiling of Mobsteel’s Motor City Vice at the M1 Concourse Stage. Celebrate 100 years of the Lincoln brand and get the opportunity to see, sit and take a selfie with this never-before-seen automobile.

3 p.m. to 9 p.m. — Live music on the M1 Concourse stage will begin. The stage is located in the Arena and next to the Biergarten.

Other notable vehicles to be showcased at the event include Simply Red, a ’33 Ford built by Boyd Coddington and Chip Foose; 1974 Mopar Missile, built for Dodge and Plymouth; the 1952 Fabulous Hudson Hornet, NASCAR champion and inspiration for Doc Hudson’s character in the movie “Cars,” which was recently listed on the National Register of Historic Vehicles; and more.