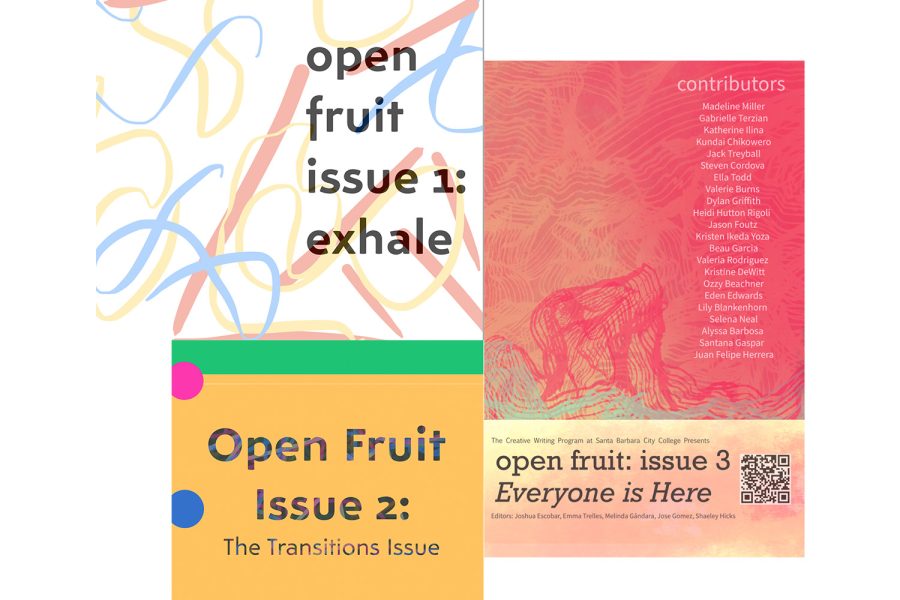 The first two issues of Open Fruit Magazine are available for viewing and reading on their website. The third issue of Open Fruit, “Everyone is Here”, will be available on Thursday, April 28. The magazine was produced by Joshua Escobar and Emma Trelles of the English department at Santa Barbara City College.

The Open Fruit Magazine is gearing up to publish its third issue, “Everybody’s Here,” which will be released on Thursday, April 28.

“We wanted to create a student magazine where students could be very involved,” said editor and English teacher Joshua Escobar.

When it was created three years ago, editors sent students a link informing them about the magazine and received multiple responses from students looking for accommodation for their work. Everyone seemed to like the idea of ​​a collaboration of creative students coming together to create something original.

“The name Open Fruit comes from one of the first meetings we had,” Escobar said. “The magazine has a weird tone…it’s cheap, messy and punk.”

The theme of the first issue, “Exhale”, was created out of the chaos of the pandemic. Open Fruit contributors believed the world needed to slow down and poetry was the perfect way to do it.

“Open Fruit was already something tangible and ‘Exhale’ showed what poetry and art do, being able to exhale,” said Emma Trelles, Open Fruit editor, creative writing instructor and poet laureate.

The second problem, “Transitions”was a collaboration with the Transition program at the Municipal College. The magazine wanted to devote its resources to showcasing the program’s work. “Transitions” was designed around the work of the incarcerated student aid program, it was later titled after the program to highlight the issue.

“We felt like it didn’t just speak to the program, but had an emotional register for the issue, given that it was in the pandemic and we could do something together,” Escobar said.

The theme for the next issue, “Everyone is here”, was born out of the idea of ​​being together again. The problem is finding significance in the present moment and not waiting for something to have value until it’s over.

“We are thrilled to amplify the diverse voices of our Santa Barbara communities with this number,” Trelles wrote. “Poems and stories allow us to share our lives with each other.”

Unlike the first two issues, this issue will include music and sound, bringing the magazine to life.

Each year, Open Fruit opens its submissions in late fall and closes in early March. With all the issues, they have been able to accept every submission received since the online platform gave them the space.

“We are looking for quirky, artistic and artful work that is overly personal, unconventional, curious, daring, authentic and fiery,” he said.

The third issue will include poetry, fiction and non-fiction writing, music, images and graphics. While the first two issues were produced in PDF format, “Everyone is here” will be entirely online.

Escobar creates all of the graphics found on the magazine from his Ipad, and he finds joy in doing so.

“It’s very therapeutic and fun to create [the graphics]”said the English instructor. “The backgrounds and textures create an abstract home for the work.

The creators of Escobar and Trelles magazines originally wanted it in print, but due to funding issues decided it would be best to use an online format, similar to zines.

“A zine is an alternative publication, they’re pretty punk, untouched by the moment and made from cheap materials.” Escobar said.

At first, they held meetings inviting all interested students, until they ran into scheduling issues and realized things worked better when they let things flow.

“We’re super resourceful, things just happen and come together,” he said, “everything is happy accidents.”

Open Fruit will host a launch party and open mic at 5:30 p.m. on Thursday, April 28 at IDC 106 on West Campus to kick off the third issue of the creative writing and visual art magazine.