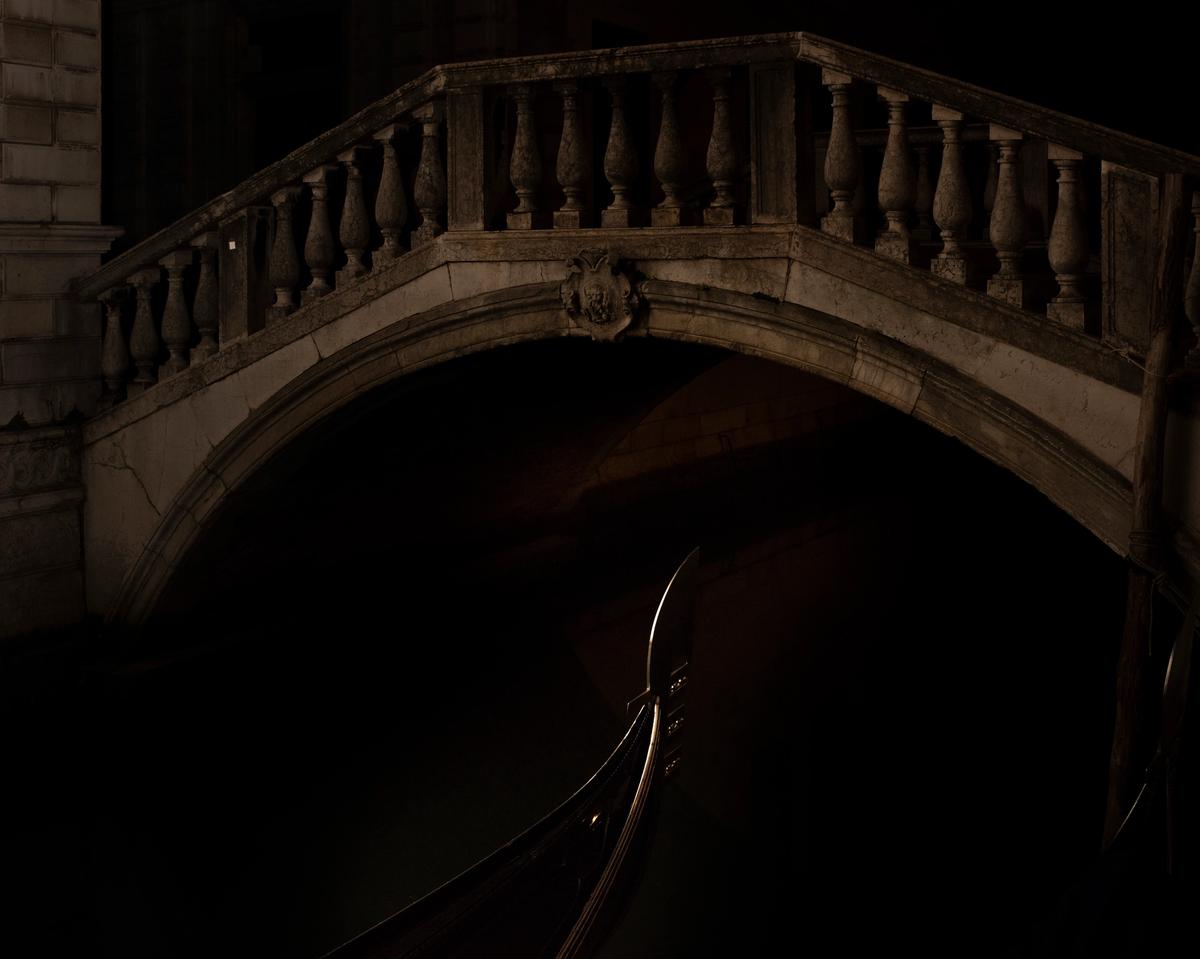 This story began 35 years ago and refuses to end …

In the summer of 1987, my parents and I came to Italy from Moscow via Vienna. We waited for our American refugee visas by the Tyrrhenian Sea in the town of Ladispoli, better known for sharing a train station with Cerveteri, site of the famous Etruscan burial mounds. At the end of our Italian summer my parents and I took a low budget bus tour of northern Italy which took us first to Florence and then to Bologna and San Marino, and finally in Venice. The organizers only allocated one day and one night for Venice, and in my immigrant memory, those 24 hours lasted forever, kept in a beautiful setting.

But to unlock this story of a Jewish Russian immigrant returning to Venice requires one more silver-plated key, which has very little to do with emigration or the lives of exiles. In February 2017, my wife Karen and our daughters Mira and Tatiana spent three weeks in Italy. On our first day of skiing in the Dolomites, a snowboarder lost control and crashed into me at full speed. He turned out to be a neurosurgeon from Berlin. I won’t bore you with the details of where his grandfather served on the Eastern Front during the war, but I will tell you that I was very lucky to have ended up with only four ribs. broken. Herr Doctor Death had targeted my spleen. Anyway, I didn’t know how to ski. In the morning, I would walk my wife and daughters to the nearest elevator in Santa Croce, then return to our suite at the hill station, eat toast with bresaola, drink double espresso and I was writing true stories. And I did my best to make sure my loved ones didn’t develop a guilt complex.

The following summer I entered the sixth decade of my life and my wife and daughters decided I deserved a week of makeup to ski in ancient South Tyrol. Everything had been perfectly designed, but of course it is well known that perfect plans portend calamitous complications. We were flying from Paris to Venice. In Venice we would have two days for jet lag therapy and a total immersion in the splendor. On the morning of our third day in Italy, we had to drive to the Dolomites. The magnanimous calendar put us in Venice on Christmas Eve, which seemed to us righteous Judeans to be a particularly attractive prospect.

On December 23, 2017, we arrived at Logan Airport, passed through security, and boarded a Delta aircraft. The flight from Paris was leaving at 7.15 in the evening. Here began our misadventures. We first sat on the plane for a full hour, waiting for the luggage to be loaded – the freight loader got stuck due to the frost. Eventually our Boeing 767 entered the runway, picked up speed, and then… stony sprites began to squeak and vibrate somewhere inside the plane, which came to a stop. The captain announced that there was something wrong with the rudder and we returned to the terminal. Then came an hour of total chaos: waiting for technical assistance, returning to the terminal while taxiing and finally receiving clearance to disembark. During all this time, no instructions were given. My wife, who was born in Philadelphia and raised in New England, said the country was “falling apart”, and I gladly agreed, visualizing in my head the San Marco pigeons and the straw hat gondoliers. braided with hanging ribbons. Using the full arsenal of my Russian, Jewish, American and ex-Soviet rhetoric, I convinced a Delta team leader that it was absolutely essential that my family be in Europe in the morning, otherwise universal harmony would be broken. She promised us seats on a plane to Amsterdam, but it turned out that they wouldn’t be able to release our checked-in suitcases from the original plane until they determined the source of the dysfunction. And without suitcases, they couldn’t send us to a different destination (read: fate.) She said it all in a half-whisper, sparking heavy thoughts on the real reason our flight was delayed. I won’t describe the next two hours. I will only say that they towed the plane to a hangar to perform various tests, and finally at 1 a.m. they announced that the flight would be leaving after all.

We landed at Charles de Gaulle not at 8 a.m. as scheduled, but at 3 p.m. Imagine a plane full of travelers who missed their flight, all channeled into a queue at the Delta / KLM / Air France service counter. After making our way to the counter we came across a smiling agent named Karim, who immediately assured us that he would take care of “everything”, including the “little lady” (Tatiana ) which looked “angry and tired. “There were no more direct flights to Venice, so we would be connecting in Rome and at 10:30 p.m., if Gd wanted, we would land in the lagoon.

“What about our luggage? Our ski boots and everything? Karen and I asked.

“I have already sent your suitcases to Venice,” replied the coral-toothed Karim, handing us new boarding passes, meal vouchers and silver Delta logo pins for our daughters (who politely agreed. but have never worn them).

After that, things started to improve. The Fiumicino ice cream was genuine and even the flight to Venice was only delayed for a quarter of an hour. At Marco Polo, we waited in vain for the baggage carousel to return our suitcases. There was only one agent at the Lost Heaven counter. A middle-aged Venetian lady with a big face looked into her computer and informed us, with contempt in her voice, that our luggage had been sent “to Atlanta or elsewhere”. Having no luck again, we left the terminal. Nearby water taxis were not operating due to heavy fog. It was already 11:30 p.m., the airport was deserted, and it was Christmas Eve. Finally a taxi stopped and the driver agreed to take us to Piazzale Roma and then miraculously called us a water taxi.

The real Venice was revealed with twinkling lights on the surface of the Grand Canal. The whole family was cheered up. At the landing stage of the Hotel Saturnia (almost Saturnalia), a monocle night porter was waiting for us. The windows in our two story suite faced the Rio de la Vesta. We went to bed at 1 a.m. A whole day in Venice awaits us. Only one day.

The day started and ended in San Marco. Like a brilliant poem or a work of fiction perfected over time, Venice was unrecognizable. Venetian women dressed in long tunics still threw themselves into the canals from the embankments (rhythm Pasternak). Purple pigeons descended from under the feet of my beloved K. while a melancholy winged lion lowered its Levantine mane over a bronze folio of the Gospel. In the midst of this beauty, a Jew almost forgot that Venice was also the birthplace of the ghetto … Finally, we never took our daughters to Cannaregio, where the Venetian Jews woke up, hoped in their eyes, and s’ were asleep, despair in their hearts. With lightness and ease, the watermarks left our wallets, imprinting themselves on the golden channels and disappearing beyond the waterline. And of course, we ran into my literary peer, a twitterato from Moscow by the name of Dmitri B., who was sitting in a cafe overlooking the piazzetta and San Giorgio Maggiore further away, a tablet next to his empty mug, sitting there and furiously sending another declaration of love for Venice.

After taking care of a guided tour of the Doge’s Palace, a hearty lunch and a round-trip walk to the Rialto, we decided to stop by the hotel and check our luggage. Gianluca, the porter whom the Russian immigrant in me nicknamed Ivan Lukich Portobelov, called the airport and found that the suitcases had already been located, collected at the airport and taken to a transfer point in Mestre. , and from there they were supposed to be delivered by boat directly to our hotel. I retransmit here the dialogue that I noted in my travel diary:

“It’s Christmas, so it should be tomorrow afternoon.”

“You’re kidding, aren’t you? Tomorrow morning, we leave for the mountains. The suitcases contain all our ski equipment.

“I am really sorry, signore. “

“You don’t sound sorry or else you would be doing something to help. “

And so, first in Italian, then in English.

In the evening we had tickets for a Corelli and Vivaldi holiday concert at the Church of San Vidal. Remember The four Seasons? There is a moment in the devastating “Inverno” where in the midst of allegro non molto your heart stops for a fraction of a second. You know that all is lost but not forever …

When we got back to the hotel, our large suitcases were lined up in front of our suite. All content was intact except for one inexplicable detail. In one of the suitcases recovered were three copies of the second Moscow edition of the Russian translation of my literary memoirs. Waiting for Amerithat, which I intended to give as a gift to my fellow Italian teachers of Russian literature. Imagine my surprise when, in one of the suitcases, instead of the Russian books, I discovered three copies of Aspettando America, the Italian translation of my book. Three copies with bright green covers, and a bottle of prosecco wrapped in a ribbon just like those worn on a gondolier’s straw hat.

We immediately uncorked the Italian champagne, and I picked up a copy of the book and registered it at our Hotel Saturnia, where, in the end, Ray Charles used to stay. And now my book rests in a display case in the lobby, next to an emerald green Venetian glass vase and a signed photograph of the blind American jazz player.

That we have always had such opportunities to unload the baggage of the past!