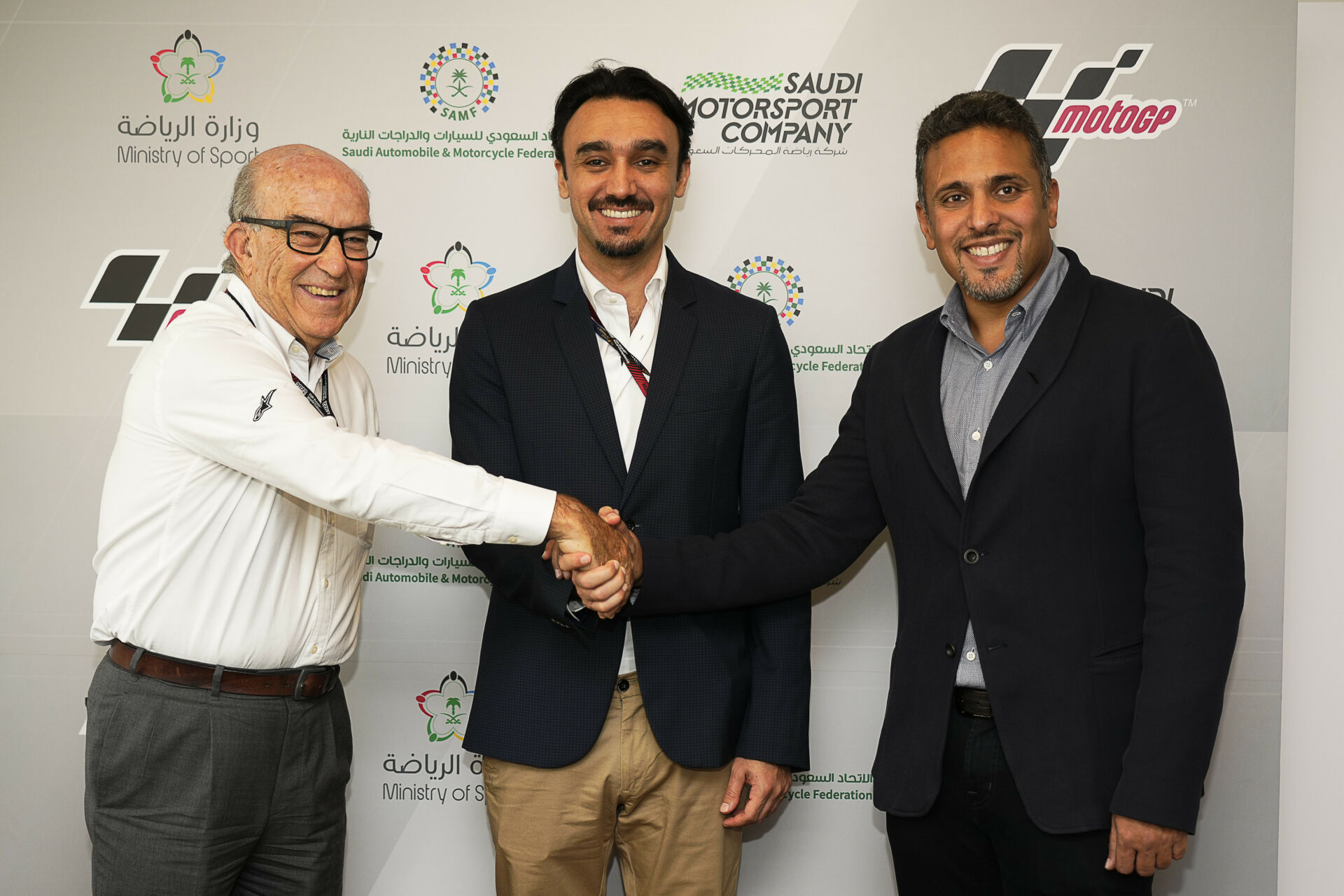 Dorna Sports and Saudi Motorsport Company (SMC) have confirmed the signing of a Memorandum of Understanding (MoU) outlining their joint intention to bring the world’s premier motorcycle racing series to the Kingdom.

The signing was made yesterday during the San Marino Grand Prix by HRH Prince Khalid Bin Sultan Al Abdullah Al-Faisal, President of the Saudi Automobile and Motorcycle Federation and the Saudi Motorsport Company and by Mr. Carmelo Ezpeleta, CEO of Dorna.

The FIM MotoGP™ World Championship is watched by over 800 million people, broadcast live in over 200 countries around the world. The addition of Saudi Arabia to the MotoGP™ calendar on an annual basis will see the sport expand further into the Middle East, with Qatar currently hosting the only round in the region.

The partnership initiative between SMC and Dorna will also see the establishment of a new talent development program for young Saudi runners, designed to increase awareness and accessibility of the sport in the Kingdom. This Road to MotoGP™ program will provide young racing talent in Saudi Arabia with pathway opportunities to compete at the highest levels of the sport, with the clear goal of developing future Saudi MotoGP™ champions. This aligns with Dorna’s ongoing commitment to the development of young riders around the world, using its platforms and championships to launch the careers of new riders and develop pathways to racing in MotoGP™.

The proposed addition of MotoGP™ continues to showcase the Kingdom as the new home of top international motorsport events [in the Middle East] and complements SMC’s growing event portfolio as it seeks to expand its two-wheeled offerings. MotoGP™ in Saudi Arabia will take place on a new multi-purpose FIM and FIA homologated circuit.

Plans to introduce MotoGP™ to Saudi Arabia follow the successful hosting of other major motorsport world series in the Kingdom in recent years, including the Formula 1 Saudi Arabian Grand Prix (since 2021 ), the Formula E Diriyah ePrix (since 2018), the world famous Dakar Rally (since 2020) and the revolutionary Extreme E series (since 2021).

HRH Prince Khalid Bin Sultan Al Abdullah Al-Faisal: “We are delighted to confirm today the signing of a Memorandum of Understanding with Dorna which clearly defines our common goal of bringing MotoGP™ to Saudi Arabia. motorcycles in the world to our growing list of world-class racing events. We look forward to working with Dorna to fulfill our shared commitment to bring the pinnacle of two-wheel racing to Saudi Arabia and to continue to offer more opportunities and initiatives to enrich the lives of all our residents.

Carmelo Ezpeleta, CEO of Dorna Sports: “As the world’s premier two-wheeled circuit racing championship, we are delighted at this opportunity for MotoGP™ to expand its reach in the Middle East by adding an annual Grand Prix in Saudi Arabia. The region is a key market for motorsport and the demand in the Kingdom for such events is growing with research showing that 80% of Saudi fans want to see more in their country Over the past few years, Saudi Arabia has shown its ability to to organize major global motorsport events to the highest standards. The signing of the MoU codifies our common intention to further explore this opportunity. We are confident that we will find an exciting and welcoming new home in the Kingdom and we will We look forward to continuing our collaboration with the Saudi Motorsport Company to jointly achieve this common ambition.

SMC acts as the local promoter of KSA’s growing portfolio of motorsport events, which currently includes the Formula 1 Saudi Arabian Grand Prix, the Formula E Diriyah ePrix, the world famous Dakar Rally as well as a round annual release of the groundbreaking Extreme E series.

These recurring major motorsport events run directly counter to the Kingdom’s Vision 2030, each committing to long-term agreements that have helped Saudi Arabia develop an unrivaled portfolio that is not replicated anywhere else. in the world.