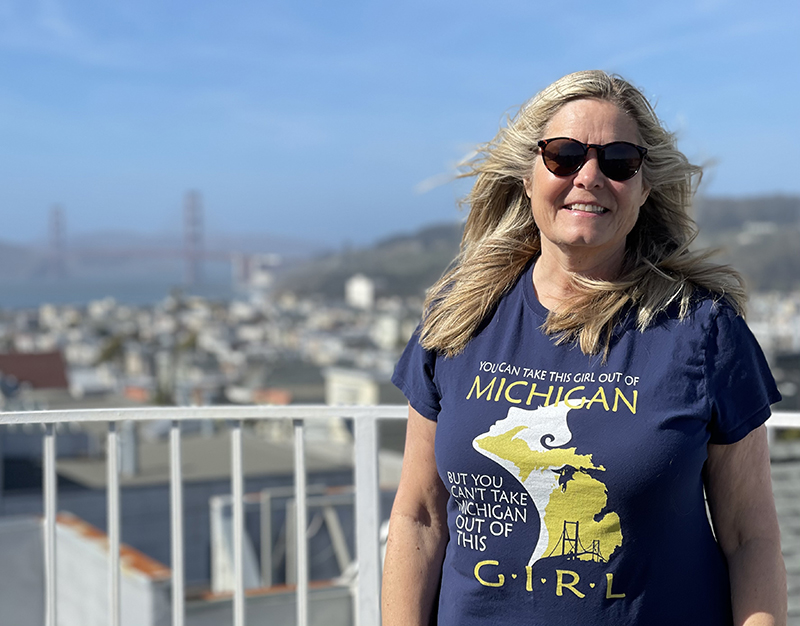 THEIher Lillelund can barely contain her fun as she explains her job as sales manager at Proterra Powered, an industry leader in the design and manufacture of heavy duty vehicles with zero exhaust emissions.

A battery technology company, Proterra Powered is part of a chain of national and global companies that Lillelund has operated or managed. “I started the sales division, which sells the technology to other OEMs like Thomas Built Buses, with their school bus, and Van Hool, with their coach. They also make their own battery-powered electric transit buses. I am therefore in the field of medium and heavy electric vehicles.

Lillelund traces her enthusiasm and passion for sustainable development back to Charlevoix, where she spent her early years appreciating how unique and special her environment was.

“I was born in Ann Arbor, but my German dad was a ski lover who wanted to be near Boyne Mountain, and he moved us north to Charlevoix when I was 5,” she recalls. “Charlevoix had a very big impact on me.

“You grow up surrounded by (the) beauty of the water – Lake Charlevoix and Lake Michigan, and the woods, and the beautiful four seasons. You are outdoors all the time, you ski in the winter on Mt McSauba, then in the summer we did the 4-H sailing course, and you just have a love for nature and the things you love and that you want to protect.

Lillelund attended the Charlevoix school from kindergarten to her first year in high school. The following year, she attended Cranbrook Kingswood Upper School (formerly Kingswood School) in Bloomfield Hills as a senior boarder. During this time, she began to appreciate the generational contributions her family had made to the advancement of society.

“We didn’t have a lot of AP classes in Char-levoix, so a lot of my friends were attending Petoskey Community College,” she says. “My mother had known Kingswood from her childhood in Birmingham, and my grandmother, Alice Wessels Burlingame, was a columnist for Birmingham eccentric newspaper for 32 years with its gardening column, “Down to Earth”.

“At Bloomfield Hills House, on the Cranbrook grounds, she founded the Garden Auxiliary of volunteers, which is still going strong today, nourishing the beautiful gardens of Cranbrook.”

When it came time to choose college, there really was only one choice for Lillelund. “The University of Michigan has played a big role in my family,” she says proudly. “I am a third generation alumnus. “

While choosing a college was easy, it took some time for Lillelund to figure out where she wanted to focus her energies for a degree.

“I probably had four different majors,” she laughs. “I started out thinking that maybe (I was) good at math, then I decided I didn’t want to do that, and I thought about psychology, then law. When you were a liberal arts student you had to take a foreign language which is amazing I think so I took German.

One of her instructors encouraged Lillelund to take her first year abroad.

“He said there was this beautiful program in Freiburg, which is in the Black Forest,” she said, “and he said, ‘Lisa, it’s going to change your life, you have to do it.’ Now the kids only go away for a semester, but back then you did a junior year abroad for 12 months and really immersed yourself – the language, the culture. You even start to dream in the language. It’s just really cool.

The experience also strengthened Lillelund’s awareness and penchant for respecting and protecting nature.

“It was wonderful to see how other people live, and how attentive they were to electricity, gas, food waste and different things, and it put a different angle in my world,” she says. . “From that point on, I never looked back. I had a global mindset that the world doesn’t start and end in America. I went back to my final year and couldn’t wait to graduate and return to Europe.

As expected, she graduated and then landed a job in Düsseldorf with Hitachi Metals, a Japanese company, shortly after returning to Germany. “I started as an import clerk and then was promoted to salesman, one of the first women in this multinational company, helping sell their auto parts in Germany to customers like BMW. I liked it. And I have the business bug, ”says Lillelund.

Within a few years, she was back in the United States, in San Francisco, working in sales for an export company with a large portfolio of international clients.

“Then I went to get my MBA in Arizona at the Thunderbird School of Global Management,” she says. “I heard about it in Europe, and at the time it was the best international business school in the country. To enter you had to have lived abroad, everyone spoke at least two languages, and I felt like I had found my people: they all had this international mindset, loved business and loved travel and see the world.

Lillelund not only got her MBA, but also met her husband, Mads, a Dane from Copenhagen – and almost immediately found her next job at Cybex International, a manufacturer of medical testing and training equipment.

“I was recruited by Thunderbird for this position,” she says. “I spent two years at their headquarters in New York, then moved to Brussels, Belgium, and opened the European headquarters, where I was Managing Director Europe for six years, managing the company in 16 countries. It was awesome. I felt like I had been very lucky; I was paid to explore the world.

Lillelund spent eight years at Cybex before leaving voluntarily, as she and Mads wanted to start a family. “I wanted to be more at home if I had young children,” she explains.

Over the next twelve years, while raising two sons, Lillelund used her business experiences as a consultant and writer – “taking after my grandmother, Alice”. The family traveled the world, from Brussels to Dublin, then to New Jersey and Massachusetts. During their journey, Mads managed to launch Mango Networks, a data networking company that manufactured the equipment he designed. Shortly after launch, Lillelund signed on as COO.

“Within two years, my husband was recruited to be CEO of another company, and I turned Mango Networks into my own environmental communications company. I led it for 10 years, advising businesses, cities and resorts on how to be more sustainable, ”she says. “For example, I would recommend an EV charging station for a city or a business park, or electric vehicles or buses.”

During this time, Lillelund also established a strong connection with her roots in Michigan.

“I rented a branch in Detroit from TechTown in 2015” and “I discovered Proterra and suggested their electric bus would be great for some of my customers,” she says. “And the next thing you know, I met them and they ended up offering me a job in 2018.”

The new position meant yet another move for Lillelund, to Proterra’s headquarters in Burlingame, Calif., A place with an important connection to the Lillelund family.

“Burlingame is named after Anson Burlingame, a distant relative who also went to the University of Michigan and was known as a human rights fighter (and) an abolitionist who campaigned for Lincoln,” she said. “He was also appointed Lincoln’s Ambassador to China, where he created the first treaty recognizing the rights of Chinese citizens, known as the Burlingame Treaty.

On Burlingame’s death in 1869, Mark Twain wrote a glowing obituary, praising him for, among many other noble qualities, his diplomatic acumen: “In every work of this man’s life,” Twain writes, “there is had a good and noble motive; and in nothing that he did or said there was nothing small or low.

Following in her family’s footsteps, Lillelund uses her own sense of diplomacy, enthusiasm and relentless determination as she pursues her goal of making a positive impact on the environment, especially the school bus market.

“Greenhouse gas emissions from transportation accounted for 29% of US emissions in 2019,” she says. “The US school bus fleet of approximately 480,000 yellow buses is the largest public transport fleet in the country, transporting approximately 25 million schoolchildren, on average, each day. A 2018 report from the US PIRG Education Fund found that converting US school buses from diesel to electric would reduce greenhouse gas emissions by 5.3 million tonnes per year, which is equivalent to removing about 1 million cars on the road.

Lillelund is particularly excited about the progress she has made in sustainability in her home country. “Michigan is the perfect place to do a lot of this innovation,” she says. “I was really proud that it was one of the first states in the country to devote its first round funding (VW regulation) exclusively to electric school buses. We were fortunate enough to partner with DTE Energy to provide special grants to public schools in Ann Arbor. They have four buses and Roseville has two. It’s especially gratifying for me to have clean, zero-emission transportation for children.