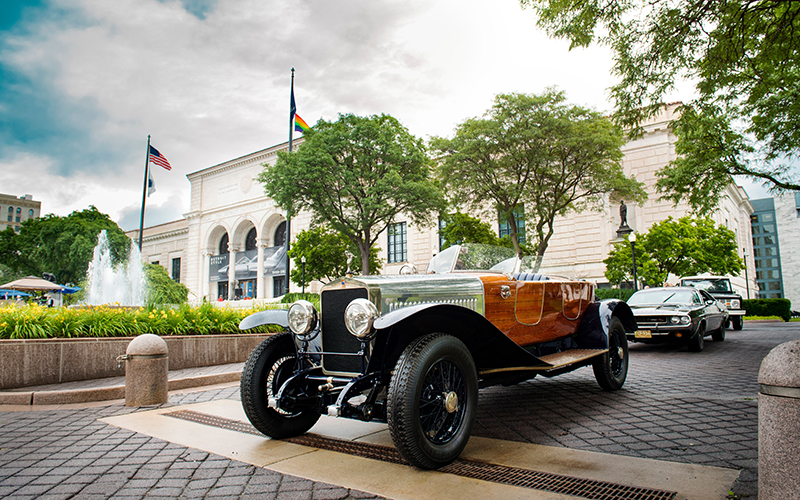 Organizers of the Detroit Concours d’Elegance, which takes place Sept. 16-18 on the grounds of the Detroit Institute of Arts and nearby streets, as well as Comerica Park, have provided new features and amenities for the celebration of the automotive and design at a press conference on Thursday.

On Sunday, September 18, the Concours will feature 140 historically significant vehicles set up on the lawns surrounding the DIA, along Farnsworth Street to the south and E. Kirby Street to the north, an upscale concession area called Club Detroit, food trucks, a retail store called The Shop, and the awards ceremony right outside the doors of the museum.

Paid access will be at John R and Farnsworth and John R. and E. Kirby. A large concessions area will also be set up along John R., just east of the Detroit Film Theater. Additionally, there will be hospitality booths for executives and sponsors, as well as two bars complete with water refill stations.

Hagerty, the Traverse City-based automotive lifestyle brand and collector car insurance provider, has taken over the leadership of the Concours of America in 2021, one of the nation’s largest historic automotive events, which was held annually at the Inn at St. John’s in Plymouth Township. . The company announced a new name and location, refocusing it on the city of Detroit starting with the September 2022 event.

“Despite Detroit’s role as the center of the automotive industry, it has always meant more than that,” says McKeel Hagerty, CEO of Hagerty. “Detroit was known for its taste – guiding the pop culture of music, arts, sports and, yes, cars through the decades. So this car weekend in September isn’t just that – it’s is a spotlight on big cars but also on a big city.

On Saturday, the parking lots at Comerica Park will be transformed into Cars & Community, a family-friendly car festival featuring three unique shows for one ticket. RADwood, a celebration of the 1980s and 1990s lifestyle, combines vintage attire with automotive awesomeness.

A few blocks away, Beacon Park, located at W. Grand River Avenue and First Street, will see the celebration of the electric vehicle with DTE – Electrified, a partnership with DTE Energy and automakers who will have presented electric vehicles to see. The special viewing is Saturday, September 17 and free to the public.

The Saturday Night Motor City Party takes place at the Taubman Center at the College for Creative Studies. The event will include a rolling dinner, an open bar and a celebration of the winner of the 2022 competition – Automotive Hall of Famer, Detroit design legend and industry leader Ed Welburn, who was vice president of global design at General Motors .

The immersive experience will also include a panel discussion with McKeel Hagerty, Ralph Gilles, Design Director at Stellantis; Hau Thai-Tang, director of the industrial platform at Ford Motor Co.; and Doug L. Parks, Executive Vice President of General Motors, on the future of the auto industry and what Hagerty, Ford, GM and Stellantis are doing to keep driving.

On Sunday, the Detroit Concours d’Elegance features 15 classes of historically significant vehicles displayed on the lawns and roadways surrounding the Detroit Institute of Arts.

The non-profit partners are:

The College for Creative Studies (CCS) is located in downtown Detroit and is a major talent provider for many industries, such as transportation, film and animation, advertising and communications, consumer electronics , sportswear, etc.

Midtown Detroit Inc. provides funding to Detroit as part of its mission to support and enhance community and economic development, while preserving and promoting culture in the Midtown and New Center neighborhoods. They represent more than 150 stakeholders in the region, including Detroit’s flagship educational, medical and cultural institutions and have invested nearly $800 million in projects since 2014 (parks, green spaces, infrastructure and public space improvements , etc.). MDI has supported the opening and expansion of 178 small businesses since 2014 and provides affordable housing.

Drive One Detroit provides at-risk youth in the Detroit metro area with vocational training in automotive technology, machining, welding, woodworking and transportation design. They offer a professional skill set in technical education and training for students in grades 7-12 who are looking for hands-on education options, a technology-centric school, or who have a keen interest in technology. but poorly served or unavailable.

More information about the 2022 Detroit Concours d’Elegance, including Detroit Social Club and Club Detroit tickets, is available at DetroitConcours.com.