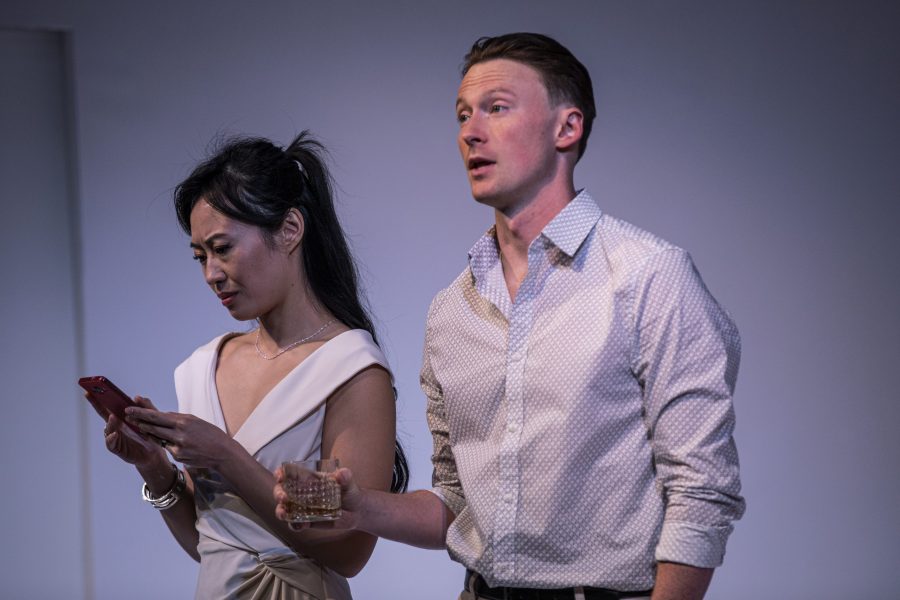 It’s not often you hear open laughter, moans and sobbing in the theater. But Post-Democracy, Hannah Moscovitch’s effective examination of the rich and the unforgiving, is so full of burning questions and trigger lines that it’s bound to elicit strong reactions, as it did during the opening last night at the Tarragon. And isn’t that exactly what live theater should do?

The one-hour show (how many times have you heard this outside the Fringe?) takes place in a private hotel lounge in an unnamed Spanish-speaking town. Bill (Diego Matamoros), the CEO of a large company, has just received bad news on his phone, and he plans to temporarily hand over the reins of the company to Lee (Jesse LaVercombe), his fifth cousin and the current COO. .

Along with Justine (Chantelle Han), Bill’s daughter and the company’s chief financial officer, and Shannon (Rachel Cairns), who works under Lee, they are there to buy a business for their massive portfolio. But one scandal at the company has just leaked, and another – involving some in the room itself – has the potential to erupt, forcing them to consider damage control.

Moscovitch has always been intrigued by inequalities of power, whether related to gender, sex or race. (Raise your hand if you want another look at his play What a young woman should know after the Supreme Court overturned Roe v. Wade.) Here, she’s proposing the mostly white, mostly male privileged 1% fucking the poor – literally and figuratively – and throwing millions of dollars at cleaning things up.

With such a lean and wicked script – the play almost starts out as a tribute to Pinter – it’s hard at first to connect with the characters. But Moscovitch gives you just enough detail to specify who these people are; a scene in which Bill recounts key missing moments in his adopted daughter’s life, or one in which that same daughter, Justine, defends her worthy charity work in front of an embittered Lee, are worth at least two one-hour episodes. issue as Succession.

And director Mumbi Tindyebwa Otu’s output helps give us a rich sense of that world. Teresa Przybylski’s austere, minimalist and tasteful decor and her expensive costumes in neutral tones show us more than any exhibition the wealth of these people. And the way Tindyebwa Otu uses abstract artwork in the background (sensitively lit by Louise Guinand) gives the characters a bit more depth and mystery.

The cast is top notch. What a pleasure to see Matamoros, recently returned from the Globe Theater in London, UK, bring his sobriety and gravity to this captain of industry. Justine de Han exudes frustration and anger when she recognizes how pervasive the culture of the brothers is in her company. And Cairns is great at capturing the fearful, watchful behavior of the lowest-status person in the room.

I’m not sure how Lee is portrayed in Moscovitch’s play, but it was a brilliant cast to have LaVercombe sounding wholesome – the objectified title figure in Erin Shields’ play. Handsome – playing Lee. The way he delivers his line readings with fake sincerity or tiptoes around some of the script’s most offensive comments (point out the aforementioned whining) is nothing short of remarkable.

Glenn began writing for the theater section of NOW in 1997. Currently, he edits and contributes to the film and stage sections. He sees around 280 stage shows and 150 films a year. Her mother once described her work as “Seeing The Lion King”