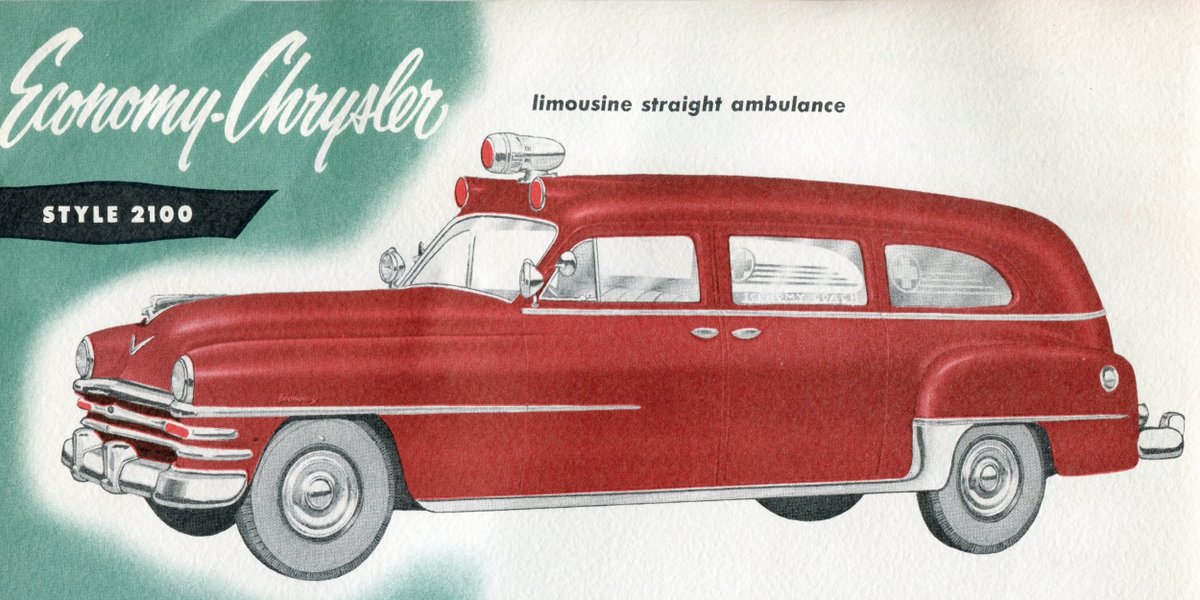 Dear Vance: Is it true that Memphis was once “America’s Ambulance Capital”? I came across this reference years ago, but now I can’t find the source. Hope you can enlighten me. – VT, Memphis.

Dear VT: Thinking about this claim, I thought our city deserved this recognition because we have so many bad drivers here (and I include my own driver, Basil, among them), and so the ambulances would stay busy, day and night, transporting victims of automobile mishaps. But like you, I can’t remember any specific source for such an honor – or maybe it’s a dishonor – so I did not know how to answer this question.

But then two things happened. First of all, while roaming around a certain online auction site, I found a 1953 sales book for The Economy Coach Company, located here, and I’m using their illustrations to make this column more colorful. Around the same time, I came across the site COACHBUILT.COM, devoted to all the American companies that manufactured coaches – and by that I mean not stagecoaches, but rather ambulances, hearses and other specialized vehicles.

The sales catalog noted that with their Chrysler Limousine Combination “the transition from ambulance to funeral coach is done in minutes.” So, I guess if they accelerated towards the emergency room and you couldn’t, the driver just pulled over, spent a few minutes turning the vehicle into a hearse, and drove you to Elmwood or Memorial Park.

Sure enough, from the 1930s onwards, Memphis was home to four different companies that made ambulances and what they called “funeral coaches” – “hearses” apparently didn’t look fancy enough. The correct term, in fact, for these vehicles is “professional cars”.

It is here that, once again, I express my dismay at what I see as an inappropriate overlap between the ambulance sector and the funeral director. It’s a blatant conflict of interest, if you ask me. From the early to mid-1900s, anyone who needed an ambulance did not call 9-1-1 (because it had not yet been developed) or call an ambulance company. Instead, they contacted one of the city’s large funeral homes – Thompson Brothers, Hinton, or Spencer-Sturla – who all promoted their rapid ambulance divisions.

My concern is that if a funeral home was running an ambulance business, was it really in their best interests to get you to the hospital on time? If the victim didn’t survive, maybe the company thought they might offer funeral services then, but the two shouldn’t be related, if you ask me.

Years ago, I wrote a column about Memphian Jack Ruby, who ran the city’s largest and best-known ambulance company. Ruby had, I presume, received the proper training to deal with medical emergencies, but what really bothered me was to learn that – it was off again – he was an undertaker and licensed embalmer. Readers, would you find this knowledge reassuring, knowing a embalmer was your ambulance driver?

And of course, the two coach companies I mentioned not only provided separate ambulances and funeral coaches, but the sales catalog noted that with their Chrysler Limousine Combination “the switch from ambulance to ambulance. The funeral coach is carried out in a few minutes. “So I guess if they accelerated towards the emergency room and you couldn’t, the driver just pulled over, spent a few minutes turning the vehicle into a hearse, and drove you to Elmwood or Memorial Park.

I certainly hope they have turned off the siren and the flashing red lights.

But back to the question asked. According to experts from COACHBUILT.COM, the four Memphis companies were Weller Brothers (located at 1150 Madison), Barnette (Dudley and Eastmoreland), Comet (later called Pinner, at 3723 Lamar), and Economy (later called Memphis, at 2087 York). And since the booklet I bought is for Economy / Memphis, I’m going to focus on this company, which opened here around 1945. It’s too confusing, in my limited space, to present the story of four companies producing similar products, and it certainly doesn’t help that the co-founder of Economy Coach – a member by the name of JK Barnett – has no business or family connection with Guy Barnette (spelled with a ” e ”supplement), its main rival.

I might be cynical, but if I urgently need an ambulance or hearse, I doubt I’m in the mood to appreciate its “authentic style interior fittings,” and I probably won’t. in a position – alive or dead – to admire her “striking beauty”.

I must explain that Economy did not build its vehicles from scratch. All of them were “conversion companies”, not automakers. Instead, they took the latest models of Ford, Pontiac, Chrysler and Chevrolet delivery vans and drastically transformed them by lengthening the roofline, adding rear doors, installing specialized equipment inside and outside and making many other changes. By the time they were completed, the only still recognizable feature of the original car might be the grille.

I don’t have actual sales figures, but working at a factory in 2087 York in the Cooper-Young neighborhood, Economy not only supplied vehicles for the Memphis market, but was also a subcontractor to companies of ambulances in other states. The models described in the sales booklet focused on their so-called “economy” line: the Chrysler 2100 Economy Straight Ambulance, the Chrysler Limousine Combination, the Pontiac 1500 Master Limousine Ambulance and the Pontiac 1000 Junior Ambulance.

“Junior” ambulance? It looks like something a kid would drive. Despite this, the folks at Economy Coach have insisted that this vehicle “is built to give you years and years of reliable service. The long, flowing lines of the sturdy all-steel bodywork and the richness of the authentically styled interiors create an impression of striking beauty and unsurpassed quality. Special features included a fold-down attendant’s seat, roller shades, “fine leather upholstery” and “fold-down type ventilation windows”. As they were commercial vehicles, they did not have carpet. Instead, they were covered with a material normally associated with kitchens more than cars: “premium inlaid linoleum”.

I might be cynical, but if I urgently need an ambulance or hearse, I doubt I’m in the mood to appreciate its “authentic style interior fittings,” and I probably won’t. in a position – alive or dead – to admire her “striking beauty”.

The top model of economy coach in 1953 was the Chrysler 2100, offering “the best engineering of all, along with a practical design that accurately predicts and meets the stringent demands of the funeral director.” As Lauderdale this would be the only one suitable for our family. Built on the Chrysler New Yorker chassis, one of this automaker’s top-of-the-line models, “the Limousine Straight Ambulance gives you more power than you’ve ever driven before, as well as unmatched beauty of the line. and equipment “.

Buyers could have the seats covered with “the highest quality fine art leather” or mohair that was available “at an additional cost”. Now keep in mind that in 1953 none of these vehicles had air conditioning – the main ventilation was a “fan in the rear compartment” – so it’s hard to believe that mohair was a popular option in the South. Customers who preferred the 2100 model, however, had the choice of “the new Fire-Power V-8 engine with 180 horsepower and PLUS, or the Spitfire engine with 119 horsepower.”

When browsing the Memphis Coach catalog, one detail certainly stood out: their paint colors. Despite my temperamental lifestyle, I have never needed an ambulance or a hearse (yet), but most readers, I imagine, would expect to see ambulances in red or white. , and hearses in black or white. Memphis Coach, however, boasted that “all paint colors are available” for their cars, and their sales book shows hearses in forest green and navy blue, and a “limousine main ambulance” painted in a pretty shade. canary yellow (shown here).

Despite this fine selection of vehicles, the experts at COACHBUILT.com noted that Economy had had issues with its main supplier, the Detroit automakers: The additional costs involved ultimately forced many of them to close their doors. “

In 1955 Barnett’s business partner JB Norfleet left the company and Economy became the Memphis Coach Company, even introducing a special luxury model called the “Memphian”. It consisted of an ambulance, a funeral car and a “flower car” – used to transport flower arrangements for services.

Memphis Coach Company closed in 1961, although the COACHBUILT website offers no reason why it went bankrupt. Their competitors here had also closed their doors by that time. A broken concrete slab on York is the only clue to the factory’s former location.

Hospitals and funeral homes still needed ambulances and other “professional cars”, so where do they find them today? A spokesperson for Memphis Funeral Home told me their vehicles are Cadillacs, supplied by two different companies – Federal Coach and Sayers and Scovill – both located in Ohio.

VT, you probably noticed that I never answered your question. I can’t confirm (or deny) that our city was ever the “Ambulance Capital of America” ​​- but it seems that distinction now belongs to Buckeye State.

Have a question for Vance?