Sequels, reinventions and remakes. These works rarely live up to their original counterparts. After all, it’s hard to keep up with any medium, let alone the wildly successful ones that become cemented in pop culture and widely celebrated as classics.

Everyone has their own idea of ​​what should happen next, what shouldn’t happen, if anything should even happen at all. It is even delicate to reiterate a classic work out of respect for its creators. Damn the bands trying to cover “Bohemian Rhapsody”.

However, with enough love and appreciation for the original work, anyone can find a few kids who have a little fun with Queen’s magnum opus, even if their lead singer is far from having the skills. techniques of Freddie Mercury. That would be the best metaphor to describe Ryan North and Albert Monteys’ graphic novel adaptation of Kurt Vonnegut’s classic black comedy. Slaughterhouse-Five.

While this graphic novel adaptation couldn’t stand up to the original work, I think it would be foolish to expect that much. Adaptation also does not mean that these are the intentions of North and Monteys.

Slaughterhouse-Five: The Graphic Novel is a faithful retelling of the story of Billy Pilgrim and his journey through time. Although it covers the entire book verbatim, the authors still add their own twist to it, giving the adaptation some quirky charm and showing deference to Vonnegut and the original novel in its presentation.

One of the biggest challenges in adapting a novel like this is that much of the content comes from Vonnegut’s comedic descriptions. With graphic novels serving as a more visual medium, and the featured text often reserved for dialogue, preserving the spirit of the original work is a challenge that authors do well – including many of the best and most important texts in graphic novels. panels.

The biggest achievement of this adaptation is its inclusion of Vonnegut’s tendency to go down in history, to show things as himself. For example, Vonnegut sometimes refers to background characters as himself. This is well executed with small arrows pointing to characters with attached text saying, “That was Kurt.”

In fact, the entire opening of the original novel is Vonnegut talking about his process of writing the book. He recounts his encounter with an old war buddy and the laborious process of trying to find the words to describe a tragedy like the bombing of Dresden, the event on which this book is centered. 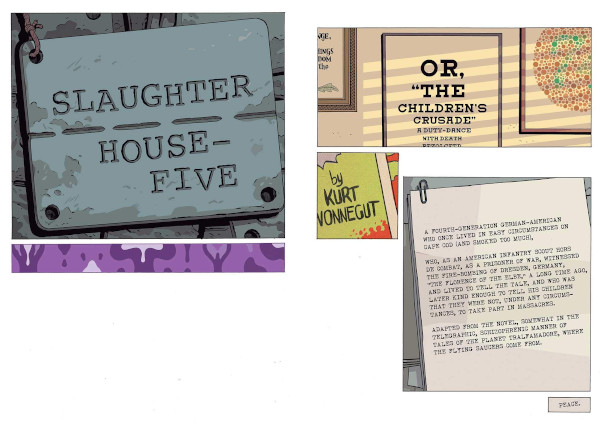 The adaptation captures this perfectly, instead of treating us to panels showing the things described by Vonnegut, the writers instead do what Vonnegut did and tell us a bit about the creation of the original work.

Part of what makes the execution of this graphic novel so brilliant is that the authors don’t claim to write as Vonnegut, but tell this part as themselves, much like Vonnegut tells the story of Billy Pilgrim . It’s a charming allusion to the original work that keeps the tone of the original intact.

The graphic novel also tweaks the details slightly to add its own unique comedic edge. For example, Kilgore Trout, a science fiction writer who failed in novel fiction, is made to be a comic book writer, with the authors making a self-deprecating remark through a character who wonders if Kilgore Trout might sink lower.

Kilgore Trout’s novels are also adapted and presented to the reader as a classic comic book. While in the original book Vonnegut describes the plot of the book, the adaptation creates an actual comic from what is described. The aesthetic of the graphic novel is completely shifted to that of a classic 1950s comic book – with the pages featuring the sepia tone and “Ben-Day” dots used in classic comic books. 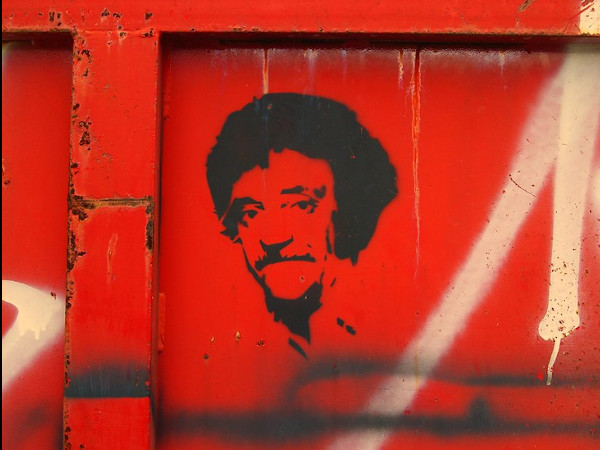 Overall, the art style has a cartoonish feel reminiscent of older comic books. There aren’t the tough angular superheroes found in the pages of Marvel and DC comics. However, it is exactly as it should be. After all, Vonnegut writes himself saying “there will be no role for Frank Sinatra or John Wayne” in his novel.

North and Monteys have just hit the mark by adapting their brilliant version of Slaughterhouse-Five. The graphic novel recreates the tone, theme, and quirky nature of the original work and is ultimately a love letter to Vonnegut’s classic.

Why then does it not correspond to the original? Simply because it would be impossible to do so. When a literary work is built on clever writing like Slaughterhouse-Five is, removing all of that is detrimental to the experience.

This does not mean that this adaptation is bad. It’s about as perfect of a recreation as I could imagine. It stays true to the original while adding its own hints of originality and charm. It’s a fun read for those who love the novel and something a little different for fans of graphic novels, where superheroes and action adventure reign supreme.

Garrett Hartman is a contributing writer at Brain Magazine. He is a graduate of California State University, Chico, double majoring in Media Arts Design Technology and Journalism/Public Relations. A pop culture lover, Garret enjoys a wide range of films, television, video games, and literature. However, as a drummer in a rock band and a fan of alternative rock, music holds a special place in his heart.