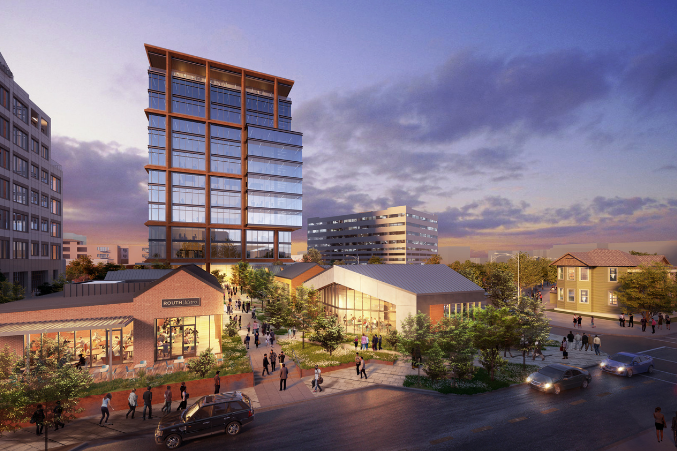 A glimpse of the next quad era

In 1965 the Dallas Morning News announced a new project at Routh Street in what is now Uptown. The Quadrangle would “introduce a new kind of merchandising to Dallas”, according to the report, “something like a Southwestern bazaar”.

It opened in 1966 as the city’s first mixed-use development, one that “houses[d] a collection of 35 or 40 boutiques and specialty stores where the “different”, as well as the best, in the world of merchandising come together,” developer Morris Spencer told the News. (Its tenants did not quite match the ambitions of its promoter. Reflection on the project in 2016fellow Quadrangle developer Philip Henderson told the newspaper that the stores ended up attracting “mainly blue-haired old ladies.”)

Today, 56 years later, its scale looks quaint. But for the time, it was revealing. The Quadrangle, which spans four acres at Howell and Routh streets, is undergoing a further redesign by Stream Realty Partners, who purchased the property in 2019. The company broke ground on the project it calls The Quad earlier this month, which will bring another office tower, more outdoor space and five “commercial bungalows” aimed at attracting local hotel tenants. Each of them will have access to the patio.

“The Uptown market is at the heart of office demand, especially for professional, legal and financial services companies,” said Ramsey March, Managing Director of Stream. “Dallas is currently one of the top five markets in the entire country…that was really all we needed to know.”

In his 2016 interview, Philip Henderson told the News that “this was the first wave of increased density for the region”. It was Oak Lawn then, a property surrounded by houses and vacant lots, not office towers and restaurants like today. Out came a series of stucco buildings and courtyards connected to these approximately 40 stores. In some ways, the Quadrangle sketched a path to new uses here. And five decades later, Mayor Eric Johnson and city council members were on hand to turn the dirt at the Quad’s grand opening earlier this month.

The 1980s brought a new 130,000 square foot office tower to the northwest corner of the property, which March says is “about 100% leased to about half a dozen customers.” That remains in place, but Stream is putting in place a new 12-story tower that will add an additional 335,000 square feet of office space. This will replace the structures that housed the BBC bar, CrushCraft Thai Eats, Tacos and Tequila, and the Segal liquor store.

CrushCraft is the only restaurant to remain, moving near Theater Three on Laclede Street at the rear of the property. Dream Café moved last year, Tacos and Tequila closed, and the Ginger Man was razed. Last week, Stream mowed down the structures that housed these tenants. This is where the new office tower will be.

March says Theater Three will receive new signage on the north side of the property, as well as a new entrance. The theater has been located in the Quadrilateral since 1969; he bought the property in 1985. March says keeping it intact was a priority.

“We realized, my goodness, that these guys are kind of buried on the site right now,” March says. “How can they be better positioned so that the neighborhood is aware of this artistic resource? »

The office tower will feature 11-foot drop ceilings, about a foot higher than standard, March said. Stream plans to replace one of the old campus structures with a quarter-acre pocket park. The buildings will cover approximately 60% of the property, with the remainder being open space that will be available to both tenants and the community.

Open space has always been part of the Quadrangle strategy. The news A 1965 report noted a 4,000 square foot courtyard that could seat about 350 people, who could dine and relax under 40 native trees.

Stream is setting up underground parking and received a zoning change that saw it lose about a quarter of its parking spaces. Stream studied parking usage to argue the decision with the city, finding that garages were often filled with empty floors even during peak hours.

“Explain to tenants that’s all they need and that if we build more parking spaces, it will affect their rates,” March says. “So why build more? It turned out to be a winning argument. …I think if you’re interested in good design and building a project that’s going to be successful, you should be interested in burying the parking lot.

The new office building is expected to open in 2024, about a year before other major projects around Uptown come online. Stream is optimistic about its appeal, especially with amenities like a club penthouse that has a rooftop patio, retail options, and all the outdoor space. Not to mention the hospital air filters that were installed as a result of the pandemic.

“We believe that when we deliver in 2024, we will be one of the very few new Class A constructions available in the city of Dallas,” March says.

The most important Dallas news stories of the week, delivered to your inbox every Sunday.

Matt Goodman is the Online Editorial Director of Magazine D. He wrote about a surgeon who killed, a man who…

We are not born environmental sinners – Insights Magazine