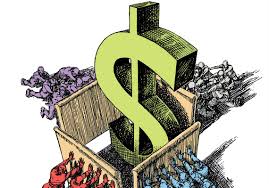 The basic outline of the problem is that if no additional borrowing is allowed, then as bonds come due, the actual national debt falls by the amount of principal that must be paid.   That means that funds can be borrowed to repay principal while remaining at the limit.    On the other hand, the interest on the national debt is a current expense and must be paid out of current revenue.

To repeat, a binding debt limit requires that the budget be balanced.   Current revenues must match current expenses, and that includes the interest expense of any existing debt.

Some pundits have argued that because appropriations from Congress are laws, the money must be spent by the President, and so, the President must borrow the money, regardless of any debt limit.     Perhaps, but municipal governments, for example, also have budgets that are passed by ordinance–that is, by law.   And there are other laws, generally set by the state, that restrict borrowing and taxes.   Further, some expenditures involve contractual obligations that “must” be paid.   Other expenditures may be authorized by ordinance, but there is nothing very specific about the timing.    If tax revenues come in less than expected, and there is no authorization to borrow, then the contractual obligations must be paid (interest and principle on debt, for example,) and then other expenditures must be postponed until more funds are received.

Of course, there is no “higher” authority, other than the Constitution, that limits what Congress may do.   But suppose there was no national debt and Congress authorized no borrowing.   Yes, imagine that the U.S. government operates with no borrowing at all.

I think it is evident that the President has not violated the law.

Only if one assumes that Congress has authorized borrowing does it make sense to say that a lack of tax revenues can never be a reason to restrict expenditures.    So, for example, if Congress has authorized borrowing subject to a limit, and the national debt is below that limit, and the President refuses to spend money because he doesn’t favor deficit spending or believes that the increase in the national debt (still below the limit) is already too high, then this would be breaking the law.   But that doesn’t mean that limiting expenditures to the funds received once the limit is reached is “illegal.”

Personally, I don’t think that default on the national debt is the same thing as repudiation.   Default happens all the time, and those that default promise to resume payments as soon as possible.   And I certainly don’t think that default on the current national debt involves questioning the repayment of the particular funds borrowed by the Lincoln administration to fund its effort to conquer the Southern states or the pensions promised to the soldiers who invaded those states.    I am pretty sure there are no remaining Civil War pensioners and little of today’s national debt was issued for that purpose.